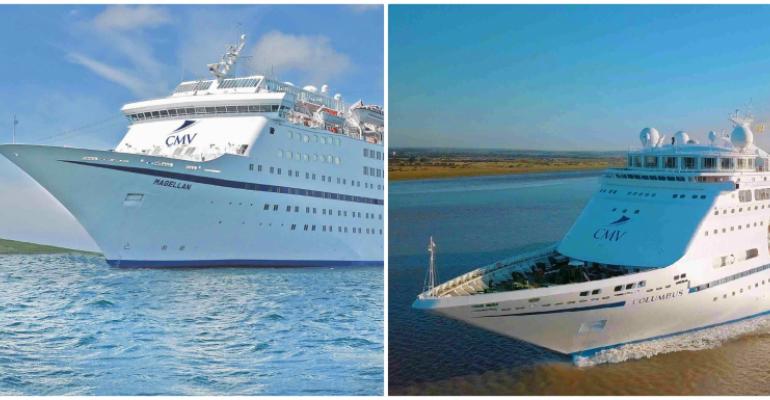 Greek ropax operator Marios Iliopoulos has taken his spending on, acquiring six cruise ships for an estimated outlay of between $65m and $70m.

This week Seajets emerged as the new owner of the 46,052gt Magellan, built 1985, and 63,786gt Columbus, built 1989. The pair were formerly owned by UK-based Greek-linked Cruise & Maritime Voyages, which collapsed into administration in July.

At layup in Tilbury each vessel was sold by separate sealed tender, ‘as is, where is’ on behalf of the UK’s Admiralty Marshal by exclusive broker CW Kellock & Co Ltd. The prices have not yet been revealed but analyst VesselsValue estimates Magellan is worth $8.36m and Columbus $11.2m, which is the same as their scrap values.

The two ships are expected to be brought to Greece and join the other four purchases in layup while their future is decided though Iliopoulos is not likely to enter the cruise business, with market watchers believing he is engaged in an asset play and will lay up the six ships until the cruise market is again in full swing.

'Such a ploy to lay up the six units will be costly anyway,' one Piraeus broker said.

The other four cruise ships were purchased from Carnival Corp. Most recently the 55,900gt Pacific Aria, built 1994, was acquired from Carnival subsidiary P&O Cruises Australia. As was the case with the three earlier buys, no price details were disclosed for the vessel which was anchored off Limassol, Cyprus.

Pacific Aria’s identical sister ship, the year older Pacific Eden, also part of the CMV fleet and also in Tilbury, went under the hammer earlier this month as Vasco da Gama, now in the hands of Portuguese cruise company Mystic Invest for a reported €9.5m ($11.1m).

Oceana is now Queen of the Oceans and under the ownership of an affiliate of Iliopoulos’ Seajets. The two HAL ships were registered to separate single-ship entities, with Veendam becoming Aegean Majesty and Maasdam, Aegean Myth.

Technical management of the three first purchases was assigned to Optimum Shipmanagement, a company with close links to Piraeus-based Celestyal Cruises.

Buyer(s) of Astor, Marco Polo not yet known

Meanwhile, the market is waiting for the identification of the buyer(s) of the final two ex-CMV vessels also sold at auction. Bidding for the 20,704gt Astor, built 1987, ended October 8 and that for the 22,080gt Marco Polo, built 1965, ended October 20.