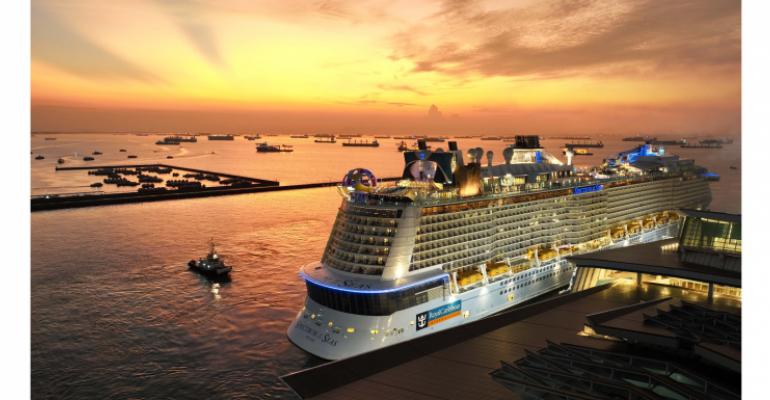 Now in Singapore, Spectrum of the Seas will begin saiing short cruises to nowhere April 11

With Spectrum of the Seas' arrival to Singapore, Royal Caribbean International extended the ship's season there to a full year: April 2023.

Follows Quantum of the Seas

'Extending Spectrum’s Singapore season to a full year demonstrates Royal Caribbean’s commitment to the market and underscores the growth potential for cruising in the region,' said Angie Stephen, VP and managing director, Asia-Pacific, Royal Caribbean International. 'We are thrilled with our success in having first returned to cruising with Quantum of the Seas, and Spectrum is the opportunity to showcase innovation and bring holidaymakers even more incredible and memorable holidays.'

Quantum of the Seas, whose own Singapore presence had been extended multiple times, will be rededeploying to Alaska for the summer.

Spectrum's arrival 'couldn’t have come at a better time, just as Singapore shifts towards general vaccinated travel and readies for a strong recovery,' said Annie Chang, director of cruise, Singapore Tourism Board. 'We will continue to work with Royal Caribbean and other industry partners to steer cruising in the region towards greater heights.'

Half a million cruisers since November 2020

According to Chang, almost a half million people have sailed since Singapore restarted cruises in November 2020, including many first-time cruisers. 'We strongly
believe that the popularity of cruising and our strong fundamentals will enable Southeast Asia to become the world’s next cruising playground,' she said.