This time next year — A look into the crystal ball 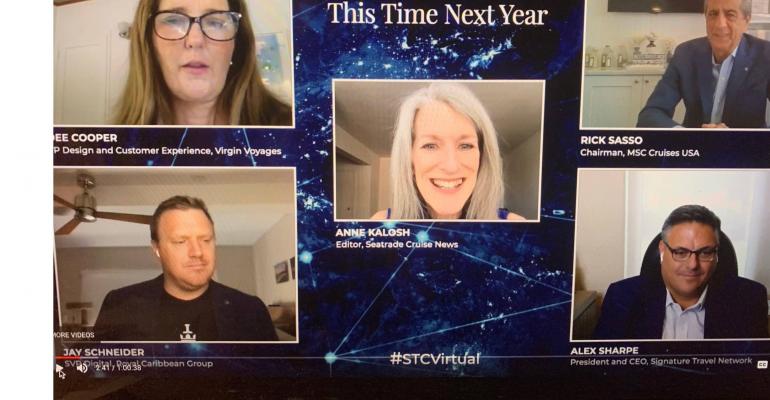 In October 2021, people will be traveling again though health safety will continue to be a concern and precautions will be routine.

Cruising will have a chance to shine thanks to 'gold-standard' protocols, and technology will have helped accelerate recovery, while pent-up demand from loyalists will be key. And though non-cruisers may have been scared off by the events of 2020, there might be a chance to draw new people should cruising prove a safer option than other kinds of travel, given the commitment to 100% testing and other protocols.

So said four visionary cruise executives who took a shot at predicting what things may be like a year from now during Seatrade Cruise Virtual's closing keynote session last week.

'Not out of the woods yet' to 'very optimistic'

'We won't be out of the woods yet,' cautioned Jay Schneider, SVP digital, Royal Caribbean Group, however advances in testing and vaccines will have helped people feel more comfortable about travel and cruising, so he's hopeful.

'Between science and technology, by next October, we'll be safer going outside, to the supermarket, than we ever were before,' said Rick Sasso, chairman, MSC Cruises USA. Cruising will benefit, because people will be accustomed to the things that will allow travel to return to normal.

'We'll have adapted, science will do a better job and people will be traveling, with cruise holidays probably on the top of the list,' Sasso said. 'I'm very optimistic.'

Health safety will continue as a key priority in travel purchase decisions, according to Alex Sharpe, president and CEO, Signature Travel Network. Yet 'The American traveler is becoming more and more resilient,' he said. 'They'll be ready to travel with their mask, or whatever it takes. We have been cooped up too long.'

'We've learned so much this year,' added Dee Cooper, SVP design and customer experience, Virgin Voyages. 'There's definitely lots and lots of pent-up demand and optimism to travel. However, we're doing it safely in a year's time. The great thing about cruise ships is they're very safely managed,' she said, citing how norovirus is controlled.

According to Signature's Sharpe, Americans want to travel close to home right now, but bookings are strong for second and third quarter 2021 travel to Europe and Alaska.

'I think we could have a really good Alaska season for 2021. That could be a springboard for all of us,' Sharpe said. Also, Americans want to get back to Europe. 'European river cruising will lead that charge,' he predicted. '... I think that will cascade into ocean cruising in Europe and we'll see a wonderful resurgence.'

Cruise lines talk about a gradual return to service, but MSC's Sasso believes things will evolve faster than imagined. His company — which has been operating more than eight weeks now in the Mediterranean — looks forward to adding more ships in the next weeks and months with the ambition to be fully operational even as soon as summer.

As for whether those ships could be at 100% occupancy in a year, Sasso said it's possible but everything depends on how the pandemic evolves, and MSC will follow all the health safety rules.

Loyal customers, logically, will be the first wave of cruisers, and while the events of 2020 may have pushed noncruisers 'further back from the fence,' Sasso thinks there actually may be a chance to 'capture a new audience when we demonstrate that cruising may be the safest way to have a vacation.'

Even with all the current protocols, 'We're already seeing the incredible enjoyment of guests,' he said. 'They're socializing.'

Cooper expects that a year from now, Virgin will be operating as a two-ship brand, with Valiant Lady just finishing its inaugural Mediterranean season and heading to Miami and the Caribbean to join Scarlet Lady, adding new itinerary choices.

Without loyal customers to fall back on, the line will draw Virgin brand lovers and loyal cruisers from other lines who want to try all the new ships, Cooper said. Also, since Virgin is 'for the young and young at heart ... We do have people who are more confident about sailing and will be ready to be the first ones back on the ships.'

Cooper noted Scarlet Lady's design in many ways proved suited for the COVID era. The ship has lots of outside spaces, ample fresh-air activities, a vast variety of dining venues that are more intimate. The Band, a wearable, allows touchless purchases, opens cabin doors and reduces crowding by enabling virtual queuing. The only key COVID-related design change, Cooper said, is the installation of the AtmosAir system.

A year from now, the distribution system will be a smaller community, with fewer travel agencies and fewer advisors, Signature's Sharpe said. However, during the pause in operations, tremendous investment has gone into training and technology that will drive efficiencies and relevancy.

'Coming out of this, [travel advisors] will never have been in greater demand,' Sharpe predicted. 'Suppliers need us. Clients need us. The revenue per advisor in the next couple years will be higher ... The travel advisor community may be a little leaner but will come out stronger for it.'

Now and in future, 'Every transaction will start with health and safety. Understanding the client's risk tolerance will help [travel advisors] place them into the right product, the right destination.'

The COVID crisis hasn't particularly accelerated technology development, not has cost-cutting delayed planned innovations, according to Royal Caribbean Group's Schneider. 'We, like many others, spent the last four, five years accelerating technology to transform the guest and crew experience. A lot of things already in development will help us return to service,' he said.

Touchless embarkation and facial recognition software for security screening were already in use. And Muster 2.0, the patented system that will deliver a personalized safety drill while enabling distancing, preceded the pandemic.

Having ships out of service, however, has facilitated fleet standardization from a tech perspective.

Small, new elements sparked by COVID include the ability to record temperatures and digital advances for contact tracing, with wearables playing a part in that.

Will the industry be smaller in a year?

A few brands have already gone bust, but the panel didn't think the industry will contract.

Sharpe cited the 'incredible investment' that's gone into the business, including the billions in additional liquidity that's been raised this year. Yes, that money comes with steep interest rates but 'look at all the people waiting to invest,' Sharpe said, adding: 'You'll see continued investment.'

Will a vaccination be required to cruise?

Schneider doubts it, because distribution of a vaccine would likely take all of 2021, so testing will continue to be key. Vaccines save lives, Sasso noted, but as far as cruising goes, 100% testing will make it irrelevant whether people have been vaccinated or not.

Cruise lines, he said, have come up with the 'gold standard' for health safety.

'We've come together as an industry to do something remarkable. You'll be safer going on a cruise than to the supermarket,' Sasso assserted.