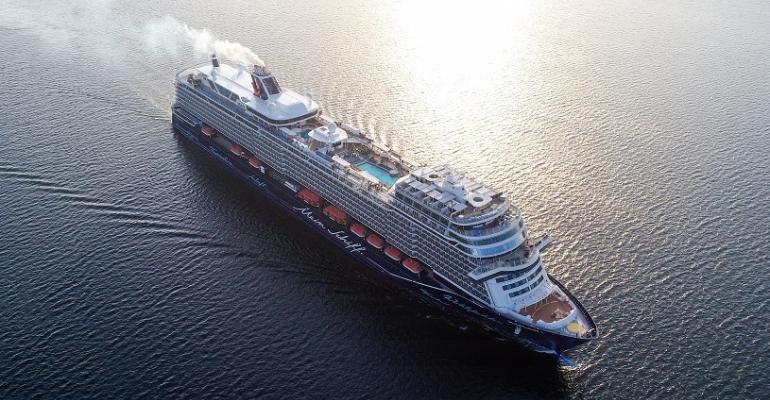 Authorities would not allow the ship to embark at German ports.

Booked passengers will be fully compensated and receive a special offer for a future Canary Islands cruise.

In November TUI Cruises hatched a plan to send Mein Schiff 1 on the long cruise, including nine days of visits to private islands in the Caribbean, with Christmas and New Year's Eve festivities on board. Travelers would have returned Jan. 14 without interacting with anyone apart from fellow passengers and crew since no transfers or flights were needed.

Pricing started at €2,999 per person in a balcony cabin based on TUI Cruises' all-inclusive package. The minimum number of passengers set for the cruise was 1,000, by Nov. 27. No detailed figures were disclosed, but Seatrade Cruise News understands the concept was well-received and that benchmark was exceeded.

TUI Cruises planned to sail round-trip Hamburg but talks are believed to have been held with other ports, as well.

It turned out no local authorities were prepared to green-light the embarkation.

Germany has experienced a second wave of COVID-19 for a couple of weeks, with the number of infections on a high and critical level. The federal government informed on Wednesday that the current restrictions — informally dubbed 'lockdown light' and including the closure of hotels, restaurants, etc., but not schools and shops — will be continued through to Jan. 10, with some restrictions eased during the Christmas holiday.

'Lockdown light' has been in force since early November, but it did not succeed in significantly reducing infection rates though exponential growth in transmission was stemmed. The situation in Germany is very diverse, with infection rates lower in the north, in particular in the federal states of Schleswig-Holstein (home to cruise port Kiel) and in Mecklenburg-Vorpommern (with the cruise ports Rostock-Warnemünde, Mukran and Wismar). In both states the situation is reasonably good.

With this in mind and recognizing that TUI Cruises had not only implemented a strict hygiene concept but would have allowed only passengers testing negative for COVID-19, the decision to block Mein Schiff 1 appeared to be based on political reasons rather than an objective risk assessment. It would have been politically difficult to justify allowing a cruise while hotels, ski resorts and other leisure businesses are closed.