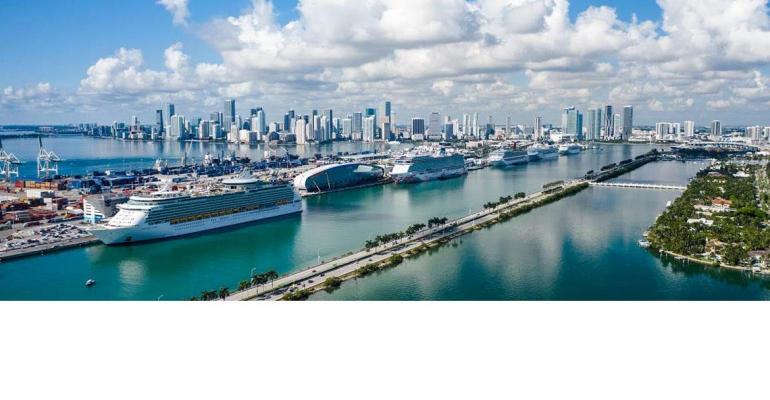 How long before there's cruising again at the Cruise Capital of the World, PortMiami?

As the clock runs out on the no-sail order, the US-based cruise industry anxiously awaits news.

The Centers for Disease Control and Prevention's order expires at the end of October, and it's anyone's guess whether cruises may be able to start in December as lines hope.

Major US-based companies are listing sailings from December, and many have now positioned their ships in the Bahamas/Caribbean — though there's still time to bring back vessels from further afield, where some may be taking on crew.

It's been nearly two weeks since a call led by Vice President Mike Pence between CDC Director Dr. Robert Redfield, Department of Health and Human Services Secretary Alex Azar; former HHS Secretary Mike Leavitt, co-chair of the Healthy Sail Panel, and the leaders of five cruise companies. Pence had thanked Leavitt and the cruise executives for an industry-driven effort that focuses on the health outcome.

Meanwhile, coronavirus cases and hospitalizations are on the rise stateside, with former Food and Drug Administration Commissioner Dr. Scott Gottlieb, Healthy Sail Panel co-chair, warning Sunday on 'Face the Nation' that the US is at a 'dangerous tipping point.'

However, as earlier reported, the Healthy Sail Panel's recommendations argued that protocols, not community infection levels, should inform the decision whether to allow cruises to resume.

The panel said it was unable to suggest specific parameters, for example, the local incidence of SARS-CoV-2, that would indicate it is 'safe enough' to begin sailing again. Instead, it suggested that 'ultimately, the thoroughness of a cruise operator’s testing plan and implementation of on-board mitigation measures should be the driving factor in creating a safe environment for cruising.'

It's been encouraging that cruises have been resuming in Europe without major outbreaks —Hurtigruten's Roald Amundsen the exception — with lines so far containing cases when they've occurred and largely keeping the virus off the ships. (MSC Cruises has turned away 'well over 100 guests' who tested positive, were traveling with someone who tested positive, lacked the correct medical paperwork or strayed from their tour 'bubbles.')

Yet, with infections rising shoreside in places like France, Costa Cruises recently took the decision to block residents of countries with rates higher than Italy's, for the time being.

Three of the Big Four cruise companies have experience with resumptions in Europe — MSC Cruises, Carnival Corp. & plc through Costa and Royal Caribbean Group through TUI Cruises and Hapag-Lloyd Cruises, which certainly helps inform what they'll do stateside.

Cruise line leaders have been chuffed with the experience in Europe, but in late September when the CDC extended the no-sail order a month, it took a different view, stating how 'Recent outbreaks on cruise ships overseas provide current evidence that cruise ship travel continues to transmit and amplify the spread of SARS-CoV-2.'

Before this, the White House had reportedly overruled CDC chief Redfield's argument for extending the no-sail order through February.

Clearly the White House is paying some attention to cruise industry lobbying, advocacy by the two Republican senators of Florida — a key swing state in the upcoming US election, Miami officials and travel trade entities, labor rallies and Federal Maritime Commission reports tallying the economic toll. Cruise Lines International Association estimates the US is losing 800 jobs for every day the industry is shut down.

S.4592, the Set Sail Safely Act co-sponsored by Sens. Rick Scott and Marco Rubio, was referred to the Senate Commerce, Science and Transportation Committee Sept. 16. There's been no further action on the legislation.

Meanwhile, a House Democrat, Rep. Sean Maloney of New York, is looking into possible White House interference with the CDC in the no-sail order.

Some industry insiders are concerned nothing will happen before the Nov. 3 election — whose results could be drawn out for days, if not longer — and what impact the winner might have on the cruise industry's fortune.

Arnold Donald, president and CEO, Carnival Corp. & plc, has said it would take 30 days to get a ship back into service, and a federal judge recently ordered Donald to attest to each ship's environmental compliance at least 30 days before entering US waters.

Carnival Cruise Line has designated Miami and Port Canaveral as the first places it plans to restart, and Bahamas/Caribbean sailings from those two ports aboard four ships are currently still on for December, though the brand is allowing people to voluntarily cancel and receive the same offer that customers whose sailings were canceled are receiving.

December departures from PortMiami listed on Carnival's website for Carnival Sunrise and Carnival Conquest and from Port Canaveral for Carnival Liberty and Carnival Elation. According to AIS data, three of the ships are in Bahamian waters while one is under way in the Caribbean.

US-based sailings by Princess Cruises and Holland America Line are suspended through Dec. 15.

Royal Caribbean Group sailings from the US are off through November.

The Royal Caribbean International brand's website lists 18 ships sailing from nine US ports during December. AIS data shows most of the ships are in Caribbean/Bahamian waters, with Oasis of the Seas currently at PortMiami. Three of the vessels are off England and two are in the Eastern Mediterranean.

Royal Caribbean hasn't indicated which may be first; perhaps the company will give information during its business update Thursday.

Celebrity Cruises' newest, Celebrity Apex, arrived stateside last week, to its winter home of Port Everglades, and has been sailing off the coast of Florida and the Bahamas. A Dec. 5 cruise is still listed on Celebrity's website, along with December departures for Celebrity Edge from Port Everglades and Celebrity Reflection from San Juan. Both ships are at Great Stirrup Cay anchorage, according to AIS data.

At Norwegian Cruise Line Holdings, President and CEO Frank Del Rio has said it would take at least 60 days to get a ship sail-ready.

Norwegian Cruise Line, Oceania Cruises and Regent Seven Seas Cruises have suspended service through November, and Del Rio has stated he's in ' no rush to be the first one out of the gate,' adding: 'I want to do things correctly.'

The NCL brand has 11 ships with sailings from six US ports listed on its website in December. Four of the ships are currently in the Caribbean, five in Europe, one in Manila and one in Singapore.

MSC Cruises, which has the benefit of its more than two months of experience operating in Europe, has MSC Meraviglia and MSC Armonia departures from PortMiami and MSC Seaside from Port Canaveral listed in December. All three ships are currently in the Bahamas.

Virgin Voyages has just notified customers of a planned start for Scarlet Lady in January from PortMiami. The company's website lists a Jan. 3 first sailing to Puerto Plata (Dominican Republic) and The Beach Club at Bimini.

But, for the industry, everything now hangs on a CDC decision.