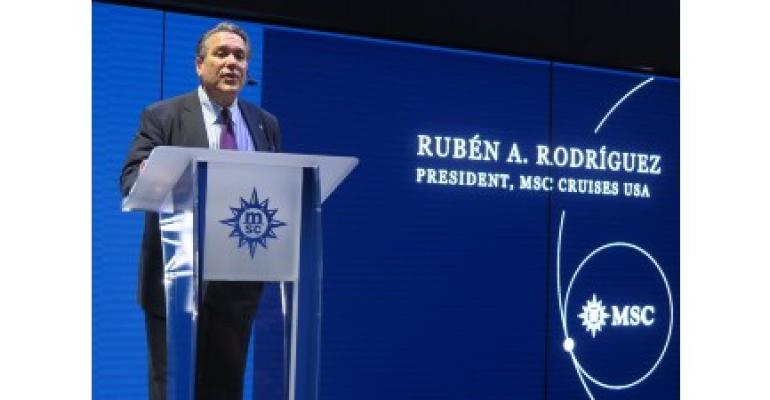 MSC Seascape's naming in New York is yet another example of MSC Cruises' big investment in the US, its fastest growing source market and one that on some weeks fuels the most bookings.

'We're bringing a lot of great ships to the US' and investing in trade support and infrastructure, and as a result, the US market is 'growing massively,' said Rubén Rodríguez, president, MSC Cruises USA.

Though he declined to share numbers in an interview with Seatrade Cruise News, Rodríguez said 'There are weeks when we are the biggest in terms of our bookings. We are among the top markets for MSC and certainly the fastest growing.

Last week sales broke records for MSC globally and in the US were 'many multiples of what we had a year ago,' Rodríguez continued. A record set in September for the Labor Day sale was surpassed by Black Friday and Cyber Monday.

New York was chosen for MSC Seascape's naming because it's 'such a priority' and a key market for Florida-based ships, Rodríguez said. New Yorkers also rank first or second among US source markets for MSC's cruises in the Mediterranean, Northern Europe and the Arabian Gulf.

Inaugurating Seascape in New York is a 'big milestone' and an opportunity to wow travel partners and media there. Come April, area travel advisors will have a ship to sell in their own backyard when MSC Meraviglia begins year-round homeporting in Brooklyn.

Some 4,000 trade partners, media and dignitaries from the US and abroad were experiencing Seascape at events Tuesday and today.

The Seaside EVO ship, which will be based at PortMiami starting Sunday, is the sister of 2021's MSC Seashore, named at Ocean Cay MSC Marine Reserve a year ago.

It was designed with a lot of outdoor space, much of that close to the ocean on Deck 8, with a promenade nearly five football fields long dotted with bar and dining options, an infinity pool aft and infinity whirlpools on the side.

New is the first Robotron thrill ride at sea — it can be programmed, Rodríguez assured, so riders don't flip upside-down over the sea unless they want to. There's also a lineup of new production shows and family entertainment features.

'We're making investments to dramatically grow US sourcing not only for ships in the US but around the world,' Rodríguez said.

MSC's European heritage and international character are differentiators in the US market where the brand targets 'cultured cruisers,' as he defined them, who are 'passionate about international travel, immersing themselves in new cultures and engaging in both historical sites and nature ... They're also passionate about sustainability, a very strong focus for us, and discovery, culinary and sports.'

Americans who experience MSC at home go on to sail in other markets. Most popular is the Mediterranean where the line has a rich diversity of ships and homeports. A new MSC Divina itinerary next summer from Civitavecchia (Rome) to the Greek Islands is 'very popular.'

Recently, there's been interest in Arabian Gulf cruises with Americans booking the new MSC World Europa 'much more' than Rodríguez ever expected. He credited the 'stunning' itinerary to UAE ports, Saudi Arabia and Qatar, along with the appeal of MSC World Europa itself. He also thinks Americans will be enticed to explore Northern Europe next year on the new MSC Euribia.

These two are the line's first LNG-powered ships.

International cruisers on the US-based fleet

Europeans still comprise an important share of MSC's US-based cruises — as much as 40% to 50% for MSC Seashore's Miami cruises in 2022 and forecast for Seascape's to come.

When MSC Meraviglia starts from New York, Rodríguez expects 30% to 40% international passengers — not just from Italy, France, Spain and the UK but also Brazil, where MSC leads the cruise market. Brazilians go to Miami to sail with MSC and Rodríguez hopes some will cruise from New York as well.

An MSC terminal in Canaveral?

MSC branched out from its Miami base in late 2021 to begin Port Canaveral service, first with MSC Divina, replaced by the bigger MSC Meraviglia. MSC Seaside will take over when Meraviglia begins its New York cruises, which include calls at Canaveral. And MSC Seashore joins next winter.

Three-, four- and seven-day cruises are a good way to try the brand and experience Ocean Cay since all Canaveral itineraries include it. More than 80% of passengers are currently Americans, thanks to the port's huge drive market appeal. However, there's been growth from the UK this year.

With departures three days a week, there's adequate terminal capacity for MSC now 'but long term we want to grow and bring newer, larger hardware and we may need additional facilities in Canaveral.'

A record five MSC ships are to be sailing from US homeports by the end of 2023: Seascape, Divina and Magnifica from PortMiami, Seashore from Port Canaveral and Meraviglia from New York.

Plus, in 2025, the aptly named MSC World America, sister of the just-inaugurated MSC World Europa, is coming stateside.

But where, exactly? Could this LNG-powered ship homeport at MSC's new Miami terminal or at Canaveral?

Rodríguez said MSC racks up 'very high guest satisfaction scores' for its private island in the Bahamas, featured on nearly all cruises from the US.

Ocean Cay MSC Marine Reserve is a differentiator. Currently MSC Meraviglia's four-night cruises from Canaveral offer a rare overnight stay there, with a Junkanoo Parade. And when Meraviglia moves to New York, its seven-day cruises will call along with stops at Canaveral and Nassau.

Travelers 'love that it's not crowed, a nature reserve, where they can relax,' Rodríguez said, by paddle board, floating in the lagoon, strolling the island, getting spa treatments or splurging on a cabana. Weddings are on the rise there, too.

A Marine Conservation Center is to open in the spring. Ocean Cay is both a nursery and a laboratory for super corals — those more resilient to ocean warming caused by climate change. They're being propagated around Ocean Cay under the auspices of MSC Foundation with the University of Miami Rosenstiel School of Marine and Atmospheric Science and Nova Southeastern University. Visitors will be able to learn about coral and the need to preserve it, and snorkel on the reefs.

Since more ships are arriving, dining and some other features will be expanded, along with staff housing as numbers grow from about 160 to more than 200. Most are Bahamians.

A further big investment is MSC's PortMiami terminal that's expected to be the largest cruise facility in North America. It's a $450m project in partnership with the port, with design to LEED certification standards by Miami firm Arquitectonica and Fincantieri Infrastructure acting as the general contractor.

It will be capable of supporting three mega-ship berths and handling 36,000 passenger movements a day. Shore power is planned, and MSC ships calling there will be able to hook up. (As recently reported, Royal Caribbean Group will share the terminal and have use of the new Berth 10.)