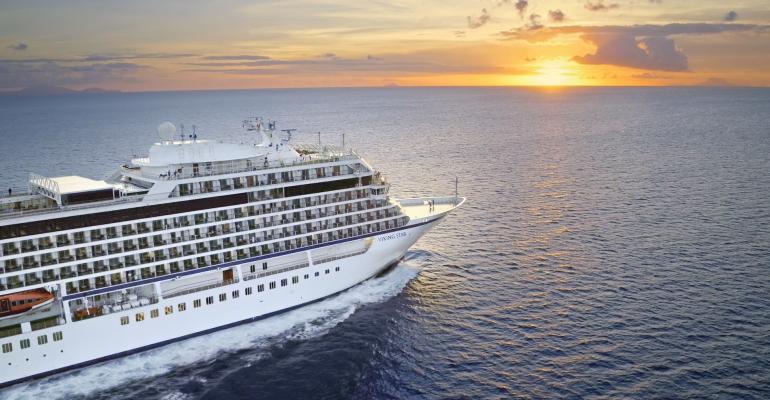 Instead of sailing westbound from Los Angeles, Viking Star will head south, around South America, before crossing to the Mediterranean

Viking became the second line to dramatically alter its world cruise on the eve of departure.

Instead of sailing westward from Los Angeles to the Pacific islands, Australasia, Asia and beyond, Viking Star will chart course south to Mexico and Central America then around South America on an eastbound itinerary continuing to the Mediterranean and through the Suez Canal to the Red Sea. In late March at Jeddah, Saudi Arabia, the ship will resume its original program and travel back through the Mediterranean to end at London in May.

The 120-day voyage will visit destinations in 21 countries. It closely resembles one of Viking's highest rated world cruises in the past, Chairman Torstein Hagen said in a live webinar Sunday when passengers were notified of the change. There will be fewer Pacific beaches but more cultural content, he said.

Hagen appealed to the explorer mindset of Viking travelers in expressing his hope they'll stick with the new program.

He likened the short-notice '180-degree chance of course' to Norwegian explorer Roald Amundsen's action more than a century ago when he turned away from the North Pole after learning others had already reached it and headed toward the South Pole instead.

Viking Star will be in Los Angeles Monday as planned but the ship will now depart Wednesday evening. Some 550 travelers were booked for the first leg of the trip on this 930-passenger ship. Those who cancel will get a voucher valued at 110% of what they've paid to Viking for use on a future cruise.

Issues with ports on the first leg

Viking officials said issues cropped up with destinations west of the International Dateline, the first leg of the trip. They were notified only on Wednesday that India was closing its ports, and that triggered the short-notice redraft. In a Q&A during the webinar, passengers asked if ports on the new itinerary may close and if there's a chance the cruise could be canceled while underway.

Viking Chief Health Officer Dr. Raquel Bono said the line is in touch with the ports and believes they understand the company's protocols, which she called 'the most stringent in the travel industry.'

Viking has a full vaccination requirement for passengers and crew, and Bono said crew boosters are up to date. It is the only cruise line to have PCR labs on each ocean and expedition ship (there's a shoreside lab network for the river vessels) and all crew and passengers get daily noninvasive saliva PCR tests. In addition, passengers must present a negative PCR test taken within two days before embarking, and they get tested at embarkation. Masks are required when moving around the ship.

More than 2m PCR tests since May

Since May 2021, the line has conducted more than 2m PCR tests for more than 100,400 passengers and crew. There have been 'some positives,' Bono said, but with the testing on board, people can be isolated quickly to reduce the risk of transmission.

Room to isolate on board or opportunity to rejoin the ship

Bono also said there's room on Viking Star to isolate anyone who tests positive during the cruise though depending on a medical assessment, in some cases it may be beneficial to disembark the person and allow them to come back after completing isolation ashore. If someone tests positive at world cruise embarkation, they'd have the chance to join the ship later after isolating ashore.

Bubble excursions required in some places

Viking officials indicated some ports don't want passengers exploring independently so an array of bubble excursions is being developed for those destinations.

Last week Regent Seven Seas Cruises significantly altered Seven Seas Mariner's world cruise on the eve of embarkation from San Francisco. A number of other lines have canceled their 2022 circumnavigations.