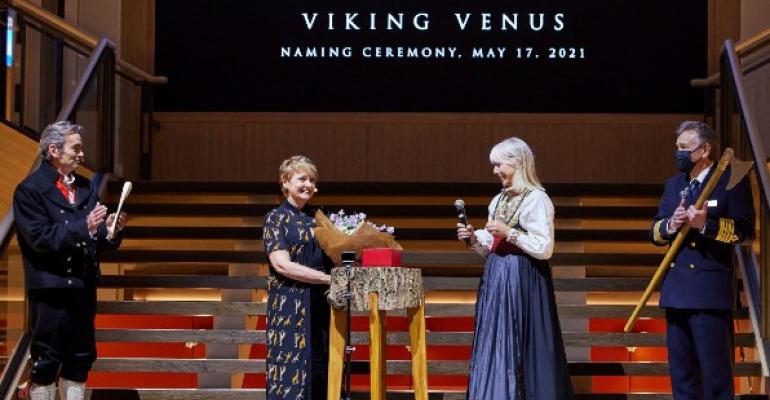 British journalist and broadcaster Anne Diamond named Viking Venus during a celebration at sea in the English Channel Monday evening.

Diamond wielded a historic Viking broad axe to cut a ribbon that sent a bottle of Norwegian aquavit smashing against the hull.

Another highlight was an 'Air Fountain' designed and installed by artist Daniel Wurtzel in the ship’s atrium for the event. Best known for his kinetic sculptures and installations using air and lightweight materials that fly, Wurtzel has shown his artworks at the Musée Rodin, the Grand Palais in Paris, the Tate Modern Turbine Hall and the Smithsonian National Portrait Gallery.

Return to service after 14 months

The festivities also marked Viking's return to service after a 14-month hiatus.

'Today is one of the proudest days in Viking’s nearly 24-year history. When we became the first cruise line to suspend operations in March 2020, we certainly did not know it would be 14 months before guests would be welcomed back on board,' Viking Chairman Torstein Hagen said. He expressed pride in being among the first lines to resume sailing and with health safety protocols including mandatory COVID-19 vaccination.

This Saturday, passengers will embark at Portsmouth for the first of five UK round-trips. The eight-day voyages also call at Liverpool, the Isles of Scilly, Falmouth and Portland.

Diamond, who has been fostering a community on Viking.TV each week for more than a year, will be aboard for the first three sailings as a guest lecturer with her presentation about the untold story of British radar inventors, including her father, during World War II.

After the UK cruises, Viking Venus will redeploy to Valletta, Malta, for Mediterranean voyages this summer and fall.

It was the second UK cruise ship naming in two days, following P&O's Iona at Southampton on Sunday.