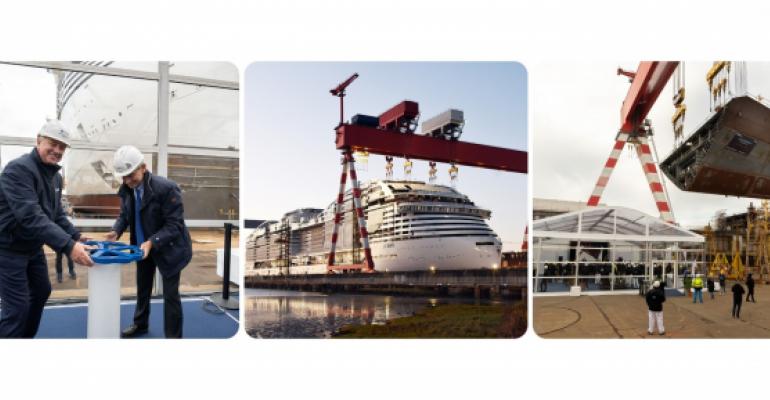 'Today is another important milestone in our journey towards net zero emissions by 2050 for our marine operations,' MSC Cruises Executive Chairman Pierfrancesco Vago said. He added that LNG is the cleanest fuel currently available at scale for MSC's operations so it's a bridge to the future.

'We have a lot more to do but I am pleased that despite all that we have faced from the pandemic over the last two years, we have still been able to achieve with our partners at Chantiers de L’Atlantique the launch of these new LNG vessels — the first ever made in France that will also introduce potential new fuel cell technologies to make them even more efficient,' Vago continued.

'We now need to take even bigger steps and we will need the continued support of our suppliers, partners and governments to achieve this. We all need to work together to achieve our green future.'

15th and 16th for MSC from Chantiers

Chantiers de l'Atlantique GM Laurent Castaing noted MSC World Europa and MSC Euribia are the 15th and the 16th vessels from Saint-Nazaire for MSC Cruises, 'which shows the outstanding quality of the relationship we established between our two companies since the '90s.'

Castaing said these builds 'represent a giant step towards what the cruise ships of the future will look like. At their delivery, they will have the best carbon footprint of the market in terms of emissions per passenger day.'

This technology — a solid oxide fuel cell (SOFC) developed by Bloom Energy — will use LNG to convert fuel into electricity at one of the highest efficiencies of any power solution available today, to provide electricity and heat on board.

This SOFC will reduce greenhouse gas emissions by about a further 30% compared with a conventional LNG engine, without producing emissions of nitrogen oxides, sulphur oxides or fine particles.

It also offers the advantage of being compatible with LNG, as well as several low carbon fuels such as types of methanol, ammonia and hydrogen.

This project forms the building block for future larger installations and begins even closer collaboration between MSC and Chantiers on R&D of fuel cell technology.

Now that MSC World Europa has been launched, it will be moved to a wet dock for continued work leading up to delivery in November 2022. 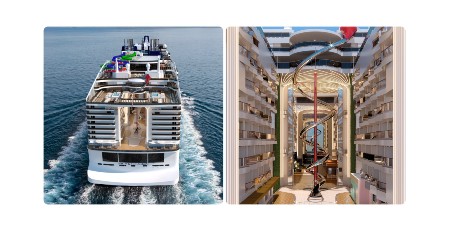 This is a new design that features a Y-shaped aft that leads to a 104-meter, half open/half covered Europa Promenade overlooked by balcony cabins. The space includes The Venom Drop @ The Spiral, an 11-deck-high slide.

In late March 2023, MSC World Europa will head to the Mediterranean for a weeklong summer itinerary comprised of Genoa, Naples, Messina, Valletta, Barcelona and Marseille.

The construction of MSC World Europa II is scheduled to commence in early 2023.