Costa Toscana floated out at a snowy Meyer Turku 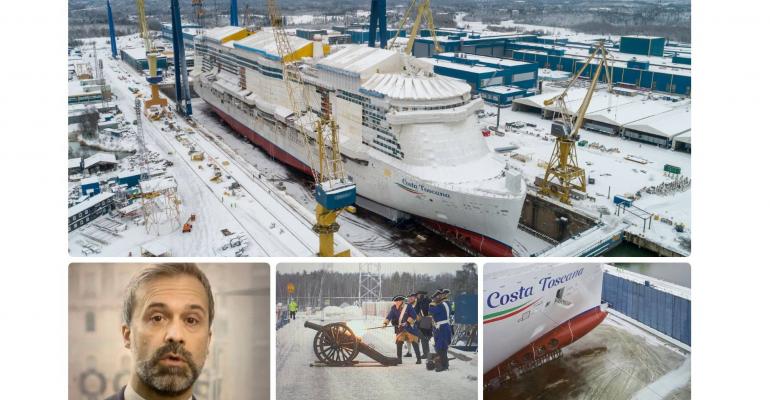 With the shipyard's traditional cannon blast, Meyer Turku opened the floodgates to float out Costa Toscana in bitter winter conditions.

The 185,000gt, LNG-powered ship, the sister of Costa Smeralda, is scheduled for deiivery in December when it will make a beeline to the tropics — Brazil — for an inaugural New Year's Eve cruise.

Given the frigid temperatures at Turku — expected to drop to minus 20 degrees C tonight — the shipyard began the float-out procedure Thursday. It will take eight hours for the 350m liters of seawater to fill the dock, then Costa Toscana will be towed to an outfitting quay, according to Kalle Hyttiä, project manager, Meyer Turku.

That will be driven by an 'excellent and innovative product,' embodied in a ship like Costa Toscana, designed as a tribute to Tuscany, Zanetti said during a virtual ceremony.

Other drivers will be a sustainable operating model, exemplified by the use of LNG, while Costa also works on developing battery power, and by a global presence, Zanetti continued.

Cruising's recovery will be gradual but global, he said, pointing to the South American market's enthusiastic reception to Costa Toscana.

For his part, Costa creative director Adam Tihany said he took inspiration for the interior design from 'bel paese sul mare' (beautiful country on the sea) — Italy — which gives ample opportunities to make something 'beautiful and sexy.'

Tihany gathered a collective of noted Italians but also international designers to represent how others see the country. The team includes Dordoni Architetti, Jeffrey Beers International and Partner Ship Design, working with the best Italian manufacturers of fabrics, lighting, glass and china.

The results will create an atmosphere that's 'warm, social and engaging,' Tihany said.