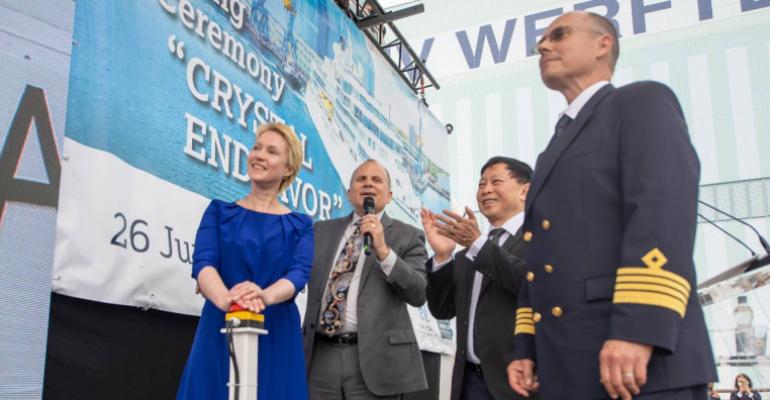 Godmother Manuela Schwesig pushes the button to release the Champagne against Crystal Endeavor's hull. With her, from left, ceremony emcee and Crystal's head of entertainment Keith Cox, Genting HK's Colin Au and the ship's captain

Hailed as a proud symbol of 'Made in Germany' quality, Crystal's first expedition ship, Crystal Endeavor, was named in festivities at MV Werften in Stralsund.

Genting Hong Kong Group President Colin Au noted Crystal Endeavor is the only polar-class expedition ship ever built in Germany, and said it is 'unsurpassed by any ship in luxury, passenger space, engineering and safety design standards.' He asserted Endeavor is commanding a price premium of 50% to 100% compared to other expedition cruise vessels.

Au disclosed that starting in 2023, MV Werften will build a series of Endeavor-class ships customized for luxury hotel brands such as, perhaps, Waldorf Astoria. These will be managed by Crystal, he said.

'Our country needs a shipbuilding industry,' Schwesig told the audience before pressing a button that sent a bottle of Champagne smashing on the hull. 'We are very proud of the workers' contribution. Our shipyards are innovative high performers with high highly motivated experts and know-how acquired over decades ... We are very proud of our industry.'

'It is an important day for Genting, the state, the region, the shipyard employees and for Germany as well,' Federal Minister for Economic Affairs and Energy Peter Altmaier said. '... It is a magnificant achievement given the turmoil of the past few months.'

Congratulating MV Werften's employees and suppliers, he called Crystal Endeavor's delivery a 'milestone' amid the COVID-19 pandemic, demonstrating 'You can, we can, Germany can still build ships.'

Altmaier noted Germany's Economic Stabilization Fund (WSF) had provided €300m to support MV Werten through the crisis to complete Crystal Endeavor. Plus, Hermes, Germany's export credit agency, backed the €1.6bn loan for Global Dream, making total support of almost €2bn for Genting-owned MV Werften. This was done 'because we are convinced the shipyard has a future and because the maritime business in the north of Germany is so important, not only for the region but for Germany as a whole.'

Au, in turn, said Genting's companies have built 23 ships in Germany, contributing more than €10bn in cruise ship exports, invested more than €800m in MV Werften, rejuvenated four shipyards (including Lloyd Werft) and created more than 3,000 direct jobs and tens of thousands of indirect ones. Next year's 208,000gt Global Dream will be the largest ship ever built in Germany.

MV Werften Managing Director Peter Fetten said Crystal Endeavor's completion would not have happened without the WSF assistance, and the support will allow the completion of Global Dream and maintain all three yards through year's end to work on suspended orders and attract new ones.

The event was viewed by several thousand people around the world via livestream on YouTube and Crystal Cruises' Facebook page.