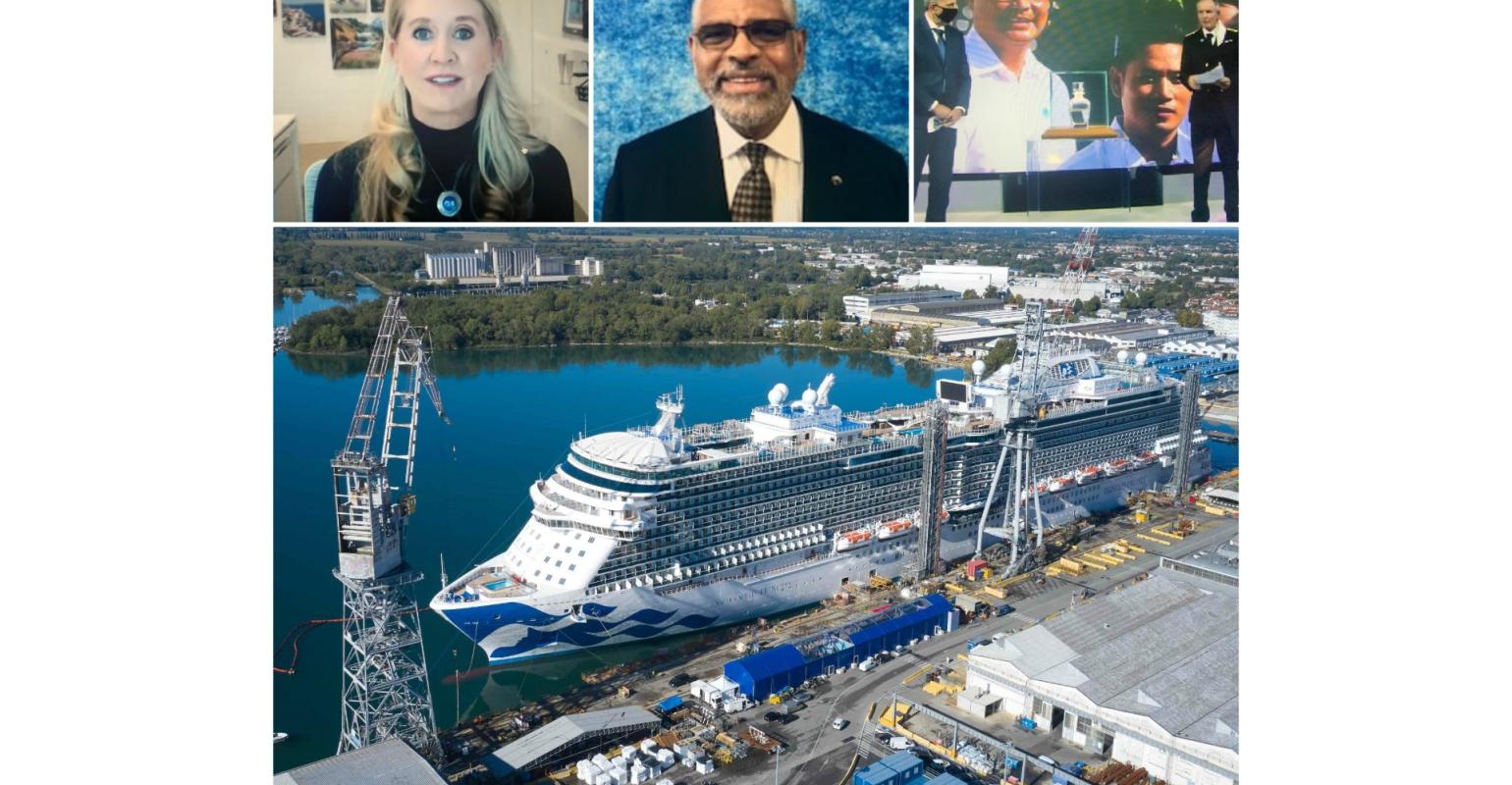 Delivery festivities for Enchanted Princess included live video messages from Jan Swartz and Arnold Donald, and on-site comments by Capt. Nick Nash, upper right, who was promoted to commodore of the Princess fleet. With him is Monfalcone yard director Roberto Olivari

Enchanted Princess became the 100th cruise ship delivered by Fincantieri in 30 years when it was handed over today at festivities in Monfalcone.

The shipbuilder put on a multimedia extravaganza that was streamed to a global audience with live messages from Italy Prime Minister Giuseppe Conte and the leaders of Princess Cruises, Holland America Group and Carnival Corp. & plc.

Enchanted Princess is also the 18th ship Fincantieri has produced for Princess. This began with 1990's Crown Princess, which launched the Italian company into the modern cruise shipbuilding business.

And it is the first cruise ship Fincantieri has delivered during the COVID-19 pandemic. Monfalcone was closed nearly six weeks, delaying the handover that was planned for June.

'This is an Enchanted Princess, a fairy-tale. A fairy-tale that has come true,' Fincantieri CEO Giuseppe Bono said.

Noting that shipbuilding and cruising have been among the hardest hit industries during the pandemic, Bono pointed to the millions of jobs the sector provides around the world, including 7,000 at Monfalcone alone. He also thanked Prime Minister Conte for his 'courage and sensitivity' in allowing cruises to resume from Italy.

€30bn in Fincantieri ships for Carnival since 1990

Arnold Donald, president and CEO of Carnival Corp. & plc, praised Fincantieri as 'an important engine in getting the economy going again' and noted Carnival has put more than €30bn into building ships there over three decades.

Stein Kruse, CEO of Holland America Group and Carnival UK, pointed out that new health protocols developed for the sea trials that allowed only critical technical experts proved so efficient that this may become the standard going forward.

He thanked yard director Roberto Olivari; Bo-Erik Blomqvist, SVP Carnival Corporate Shipbuilding; Cyril Tatar, VP newbuild services for Holland America Group; and classification society Lloyd's Register and called Rai Caluouri, who retired from Princess this year, 'instrumental in driving the design of this and our other ships over 35 years.'

Swartz noted more than 6,000 people had a role in bringing Enchanted Princess to life. Among them is Capt. Nick Nash, who she promoted to commodore of the Princess fleet, following the recent retirement of Capt. Giorgio Pomata. Tatar presented Nash with his new commodore's stripes.

And Swartz saluted the ship's relief captain, Gennaro Arma, calling him a gladiator for his service on Diamond Princess in Yokohama early in the pandemic.