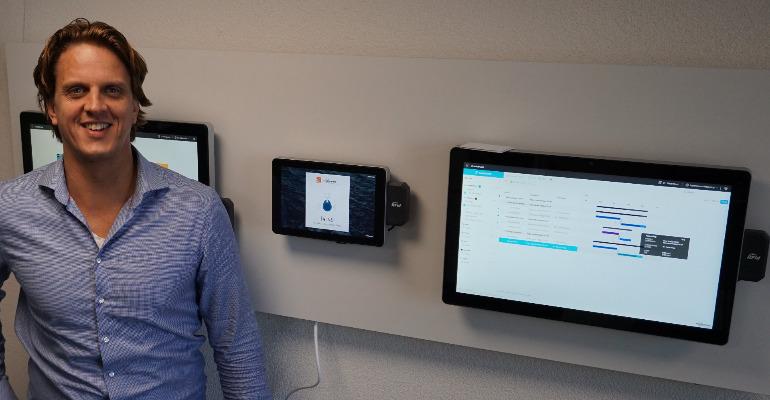 Floorganise MD Ronald de Vries in front of a Floor2Plan touchscreen display
Floorganise’s Floor2Plan uses AI to support the repair, overhaul and maintenance of cruise ships as well as the build of new ones by making predictions on end dates and budgets.

The platform processes historical data from the Enterprise Resource Planning (ERP) system, such as the registered hours, then collects data from the daily registrations of supervisors, subcontractors and operational staff. Collectively, the data is used to train the algorithm and make predictions.

‘The earlier you can identify and resolve risks, the less impact they will have on the entire process,’ explained Ronald de Vries, MD, Floorganise. ‘That’s the core idea behind the Floor2Plan tool.’

Projects are divided into specific products or components, such as blocks – covering fabrication, assembly and pre-outfitting – or room, spanning technical outfitting and functional outfitting. ‘This enables us to visualise predicted deviations for all individual components or activities in the plan,’ de Vries continued, ‘For this purpose, Floor2Plan cooperates with widely used IT systems, such as Primavera P6 and MS Projects.’

According to the MD, the predictions of the algorithm are used to revise production standards, develop and optimise processes, and make performance comparisons.

‘The model not only predicts time delays and budget overruns,’ he asserted, ‘but also identifies potential shorter times and fewer hours required for specific tasks. In the long run, this produces an accurate prediction for the various activities, spaces and phases within a project.’

Explained de Vries, ‘Our users are project managers, planners and contractors in the shipbuilding industry, not data scientists. That’s why a lot of attention has been paid to the ease of use.

‘The back end of the programme is very complex, but it is logically laid out at the front end. Using colours and graphs, predictions and deviations are displayed in such a way that you can see at a glance how the entire project, a particular subcontractor, a specific room or phase of the shipbuilding process is going.’

According to a spokesperson for Floorganise, Floor2Plan has been designed by software engineers with input from shipbuilders, ‘to help to reduce person-hours, ensure more effective use of skilled workers, more control over financial project performance, and make it possible to deliver the right parts at the  right time.’