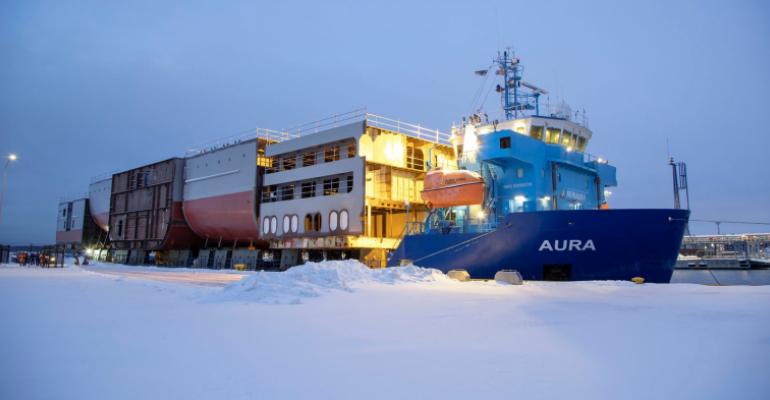 Blocks for SH Minerva, including the already painted keel at center, arrive at snowy Helsinki Shipyard

Helsinki Shipyard laid the keel for the second Swan Hellenic ship, whose name was revealed as SH Vega.

The painted and outfitted keel was among several blocks for the newbuild that arrived at the snowy yard last weekend aboard the carrier vessel Aura.

Named after the first vessel to navigate the Arctic Northeast Passage, SH Vega follows the upcoming SH Minerva as second in a series of three.

The ship will accommodate 152 passengers in 76 staterooms and suites, most with balconies, and carry a crew of 120.

SH Vega is due for delivery in April 2022, following SH Minerva in November this year. A third, somewhat larger vessel, is planned for delivery toward the end of 2022.

'Newbuilds Minerva and Vega are designed for extreme weather conditions, from the heavy ice of the polar regions to the heat and humidity of the tropics. And they’re naturally designed to respect the sensitive ecosystems of the unspoilt regions they explore,' Packalén said.

Swan Hellenic CEO Andrea Zito thanked the Helsinki team for their support: 'Delivering to such a demanding schedule while maintaining the highest quality standards is a fantastic achievement. We’re honored and thrilled to take Swan Hellenic into its next chapter with such fine ships and look forward to welcoming [travelers] on board to see what others don’t.'