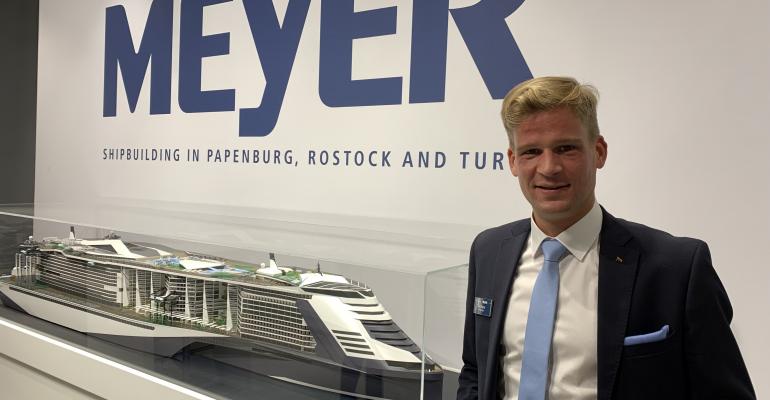 Meyer Group, the sole European shipbuilder to exhibit at Seatrade Cruise Global last week in Miami Beach, took the opportunity to showcase for the first time three conceptional models its sales and design teams have been working on these past couple of years.

The three 1:200 scale models focus on new concepts for operational, logistic and energy production onboard cruise ships, explained Lars Kruse, sales manager for Meyer’s three yards based in Papenburg, Rostock and Turku, in an exclusive interview during the show.

The largest scaled display and attracting most attention was a Trimaran coming in at 454mtr long,  88mtr wide with an approximate 431,000 gross tons and between 10-12,000 lower berths. ‘On this design we have different neighbourhoods, a centralised galley and three towers for accessing the public areas and cabins,’ noted Kruse. The Trimaran comes complete with a people mover skirting the upper decks and a Santorini-inspired village with villas located on the aft.

The Helix design fully powered by batteries is sized at 340mtr in length with 42mtr beam and 181,000gt  accommodating around 4,000 passengers. The outer design features tinted blue glass windows along the length of the ship.  At the stern is a spiral superstructure with access to all public areas on one lower and one upper deck.

A fully battery driven futuristic river cruise ship completed the conceptual models on display with emphasis here, noted Kruse, on how to improve the cabin and public spaces. Included alongside the model was a separate cut away model for a new look cabin of 1.5 decks high complete with artificial (LED screen) cabin-height window showing real time images of the outside scene, or virtual image of choice, and bed on the ground floor with open staircase leading to bathroom and shower above.

The work involved around 20 employees from design, technical, sales and organisational teams to bring it to fruition, ‘including visits to hip cities, studying land based hotels and life style trends, entertainment and leisure concepts, for ideas and inspiration.’

Completing the models on display were a TUI Cruises’ Mein Schiff vessel, Carnival Cruise Line's Mardi Gras, delivered this year by Meyer Turku, and the new Disney Wish, due for delivery next year and currently in outfitting. Whilst the ship’s outward appearance is very similar to that of Disney Dream and Fantasy, built by Meyer Werft, Kruse said ‘the inside is different’.

Kruse said the entire Meyer team attending Seatrade Cruise Global, including CEO Bernard Meyer, were very happy with their participation at the event: ‘Being here was very important to us as we were able to have meetings with several Florida-based cruise lines including the three major groups, and we have received a lot of questions about the three new concepts on display.’

Kruse concluded, ‘scaled ship models are always popular at this trade show especially when its showcasing features of the future witnessed by the steady stream of suppliers visiting the booth eager to find out more.’