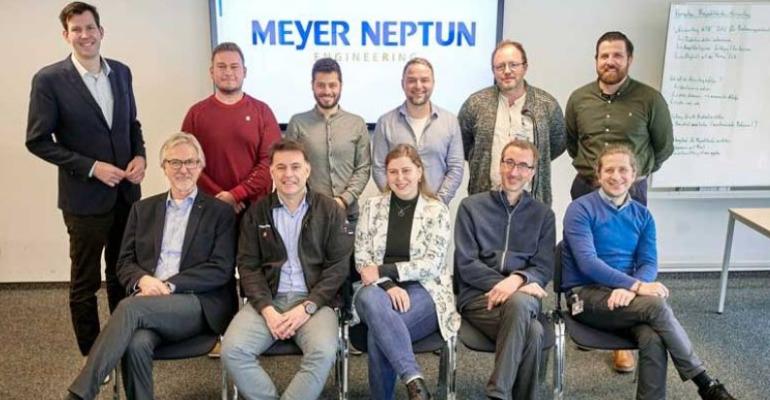 Based at Neptun Werft in Warnemünde, the start-up comprised a team of eight at the beginning of the year. According to Meyer Neptun Engineering MD Manfred Müller-Fahrenholz, the company is attempting to attract additional engineers, or ‘talents who want to shape the shipping of the future with us.’ 10 vacancies are currently being advertised online.

The company's fresh team embarked on a familiarisation phase in early January, which is to include exchanges with existing engineering teams based at Papenburg.

One of Germany's most respected shipbuilding veterans, Müller-Fahrenholz has a 40-year history at Meyer.

He was appointed MD of Meyer-owned Neptun Werft on September 1, 2000 - a position he held for 16 years until his retirement. During his tenure, Müller-Fahrenholz turned Neptun into a market and innovation leader particularly in the river ship segment and his name is associated with significant initiatives, such as the longship design realized for Viking. The successful entry into the newbuilding market for domestic ferries, as well as the establishment of an engine section production, supplying such modules to Meyer Papenburg and Meyer Turku were other milestones. The Mecklenburg-Vorpommern Ministry of Economics appointed Müller-Fahrenholz its Ambassador of Economics in July 2018.

Representatives at Meyer Neptun Engineering describe it as a ‘competence centre for special ships,’ coinciding with district head of the IG Metall trade union, Daniel Friedrich’s comment that the German shipbuilding industry should focus on creating vessels that ‘no one else is able to construct’ and his suggestion that 'Germany should become a pioneer for emission-free ships.'

Poelmann remarked that Rostock-Warnemünde was chosen as its venue due the maritime know-how of the region with a strong network of medium-sized partner companies, the proximity to the Fraunhofer-Gesellschaft, the University of Rostock and Neptun Werft.

Poelmann went on explain the start-up's advantage at having Meyer Group in the background, which has projects already scheduled that will provide engineering work in the years to come. But, Meyer Neptun Engineering is taking new approaches, he added, which build on strong involvement from the team. ‘It is a start-up where the employees also help shape the structure of the company,’ he said.