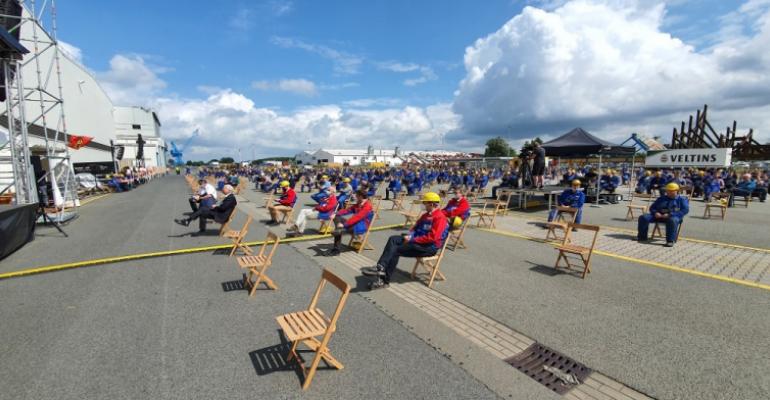 The new measures were announced to employees at a meeting Wednesday

Meyer Werft reached an agreement with IG Metall Küste and the yard's Works Council that involves downsizing and other labor concessions to stay competitive.

This responds to new market conditions triggered by the coronavirus pandemic.

Initially, up to 350 employees of Meyer Werft and 100 employees of EMS Maritime Services will be affected on a voluntary basis. An increase in external services as compensation for this reduction was jointly ruled out.

The new agreement ends Dec. 31, 2023. If the general conditions improve significantly in the long term — for example, if new orders are won — the agreement will end at the end of the current year.

Employees were briefed on the new measures in person and online at a works meeting Wednesday.

Meyer Werft said it has 'significantly less' work due to the pandemic, with production hours per year 'massively' decreased.

'The current agreement with the works council and IG Metall is an important step towards securing the Papenburg shipyard site, even though the staff reductions are very painful,' Managing Director Bernard Meyer said. 'The adopted socially responsible package for the future only works on the basis of further orders for the years 2024 and 2025.

'The orders from Japan for NYK, the participation in the construction of the Navy tanker and now a new apartment ship help to stabilize the lower utilization of production,' Meyer continued. 'Otherwise we would not have been able to achieve the current result at all. But it also shows that we are continuing on the path of developing new business areas. It's a good chance for a fresh start for cooperation with the works council and the union.'

In a three-stage downsizing process, a voluntary program with a transfer company will be implemented with the aim of avoiding or minimizing compulsory redundancies and reducing as many jobs as possible by mutual agreement.

The industrial service of EMS Maritime will be dissolved. Where possible, employees will be deployed in other production areas and companies of the group.

Management, the Works Council and IG Metall also agreed on the introduction of a two-shift model in production and production-related areas. Previously existing shift arrangements in production areas remain unaffected. Details of this arrangement are still being worked out.

The Meyer Group said it has found solutions with employees at all three of its shipyard sites to master the crisis and operate competitively.

'Now we are fully focused on the transformation of the group, further digitalization and on developing climate-neutral solutions for our ships and maritime applications as quickly as possible,' Managing Director Jan Meyer said.

This will require further innovative new ship projects. At the employee meeting, management announced another newbuilding project with completion scheduled for the end of 2025, subject to financing.

The shipyard has been working on the Ocean Residences project for some time. This 290-meter vessel will house more than 130 apartments. Meyer Werft said this order is urgently needed to prevent the utilization rate from dropping even more than 40% in the coming years.

Cruise orders on the books

Two Evolution-class ships for Silversea Cruises were announced a while back for Meyer Werft with delivery dates unspecified lately.