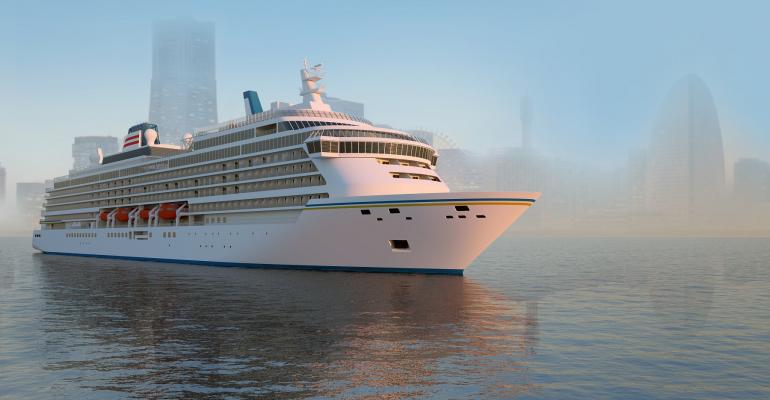 In a surprise move, Germany’s Meyer Group has secured the first contact for a cruise ship newbuilding since the outbreak of COVID-19 last spring.

Japanese NYK Group has signed a contract for a 51,950gt vessel carrying up to 744 passengers and 470 crew.

The luxury vessel, tailored to the Japanese source market, will be delivered in 2025.

Boost for the Japanese market

NYK, a stock-listed Japanese venture with more than 35,000 employees, is among the globe's leading shipping companies with a diverse fleet of several hundred ships, including car carriers, bulk vessels and container ships.

It is unknown if the newbuilding now contracted at Meyer is going to replace Asuka II, or if she will continue to operate as a second vessel.

The size of the newly contracted vessel at 228.86mtr long, 29.60mtr wide with 385 cabins.is comparable – albeit a little bit smaller – to Asuka II, which is 240mtr long and able to accommodate up to 940 guests.

Details about the onboard facilities have not been disclosed but takes experiences from the COVID-19 pandemic onboard, including amendments to the air condition as well as touchless steering.

With LNG propulsion, Meyer now has - with a single exception - only LNG-fuelled newbuilding projects left in its orderbook.

For the relatively small Japanese source market NYK's order indicates an important boost and expressed optimism with regard to the post-COVID era.

NYK's new cruise vessel is going to be constructed at Meyer's Papenburg site.

It has not yet been decided if the engine module – as it was the case with recent newbuildings, among others for AIDA – will again be pre-fabricated at Rostock's Neptun Werft.

According to Meyer's managing director, Jan Meyer, the new contract is immensely important to secure the future of the shipyard's Papenburg site, although the vessel is relatively small for the facilities there.

NYK's new vessel has been designed by Meyer itself, and the whole designing and negotiation process took place virtually through video conferences over the recent months, a novelty in the yard's 226 years of history.

Although somewhat similar in size to the recently delivered Saga Cruises vessels, NYK's newbuilding constitutes an entirely new design and thus a prototype.

In contrast to many orders taken by Meyer in the past, NYK's order is for a single ship only with no sistership options included.

The contract price has not been disclosed, but Meyer outlined his yard won the order ‘in sharp competition with other yards around the globe’.

The order for NYK's new ship is an important sign for Meyer Werft during the COVID-19 pandemic, but strong challenges remain.

Jan Meyer said the order did not mark a turnaround from the current difficult situation, as the Papenburg shipyard was tailored to build very large cruise ships in serial production.

He therefore called the order an important step among many other measures, but also highlighted the positive sign it shows, not least with NYK succeeded to win a new customer.

Moreover, Japanese shipping companies tend to contract most of their newbuildings in Japan, which turns the order into an even bigger success.

Thomas Weigend, managing director at Meyer along with Jan Meyer, said the order added a second vessel to Meyer's activities at Papenburg during 2025, although the available capacity remains for from being used to its limit – the Papenburg site is tailored to produce 420,000gt annually, but the two ships now scheduled for delivery in 2025 only have an accumulated size of 182,000gt.

In order to get through the difficult situation sparked by COVID-19, Meyer aims to achieve savings exceeding one billion euros through a wide range of measures, including optimisation of all kinds of processes on all levels.