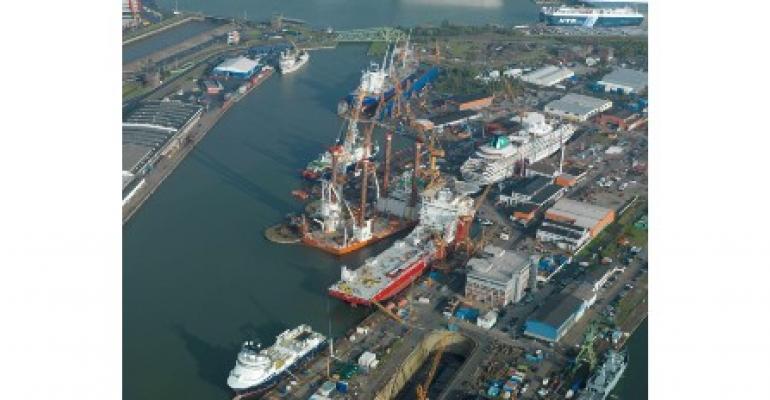 Lloyd Werft Bremerhaven, part of the Genting Hong Kong insolvency, has a new owner: the local consortium of Rönner Group and Zech Group.

A renowned yard for cruise ship refurbishments and upgrades, Lloyd Werft had been controlled by Genting HK since 2016 and filed for insolvency Jan. 10.

Rönner Group and Zech Group are family-owned ventures with backgrounds in shipyards and steel (Rönner) and building and real estate (Zech). Rönner had been looking at the yard for some time.

Lloyd Werft is the first element of Genting's shipbuilding activities in Germany to change hands following their insolvency.

Several buyers were interested in Lloyd Werft as the Rönner/Zech consortium competed with Abu Dhabi-based Al Seer Marine, which would have acquired Lloyd to concentrate on luxury yacht building.

Late Friday, however, Rönner/Zech won the race when a deal was inked. Over the weekend Christoph Morgen, the administrator for Lloyd Werft and MV Werften, announced the acquisition.

Rönner/Zech is buying the shipyard operations along with the corresponding real estate under the control of Lloyd Investitions- und Verwaltungs. The shipyard staff, understood to number slightly under 250, will be retained and were informed at a meeting Monday.

The value of the deal — which still needs approval by the German Federal Cartel Authority, expected to be granted shortly — was not disclosed. The Rönner/Zech consortium's specific plans for Lloyd Werft were not made public although the most likely scenario is a continued concentration on the ship repair, refurbishment and maintenance segment.

A business plan will be drafted shortly to be assessed by a certified public accountant.

With all approvals, insolvency proceedings can be terminated and the yard would return to normal business operations.

As a repair yard, Lloyd Werft would complement Rönner Group's existing activities in the shipyard and steel engineering business well, an option that would be relevant for the cruise business. Lloyd Werft has a long record of cruise ship overhauls, including a number of more complex conversions and upgrades.

An insider told Seatrade Cruise News the new owners may focus on sustainability, aiming to win contracts for environmental upgrades such re-engining passenger ships. In addition to its cruise activities, Lloyd Werft could also try to attract work on ferries and other special-purpose vessels.

But it will likely take some time before the future strategy of Lloyd's new owners becomes clear.

In contrast to the situation at Bremerhaven, a sale of MV Werften is not yet in sight. The administrator continues looking for a buyer for Global Dream, preferably to complete the ship at Wismar. Several parties are reported to have inspected the newbuild recently, but due to the highly specific design of the Global Dream with a focus on the Asian source market and Genting's specific business model, a sale will not be easy and likely will take some time.

Meyer Turku swings to a 2021 loss on higher turnover as pandemic impacts linger
May 02, 2022