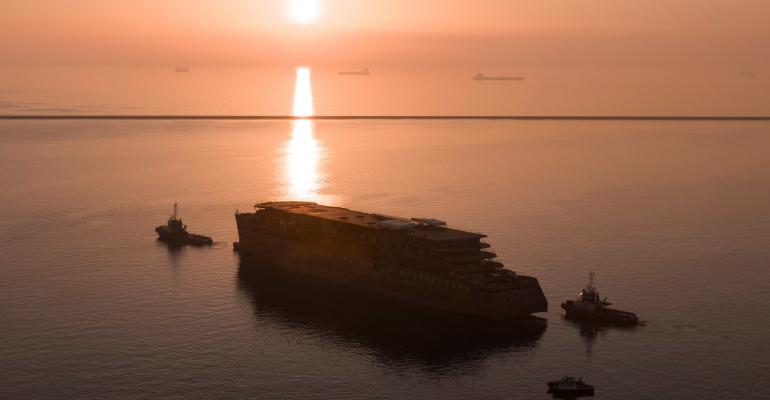 A new milestone in the construction of Seabourn’s first expedition ship, Seabourn Venture, built by T. Mariotti took place Tuesday when the hull was lowered into the water and left Trieste under tow for Genoa’s Mariotti shipyard, for final outfitting.

The hull is built up to deck nine and equipped with engines, generators and main equipment in the engine room.

The transfer to Genoa covers 1,200 nautical miles and is expected to take about 10 days.

‘This phase is going to be really exciting to watch and is a major step forward in ship delivery,’ said Josh Leibowitz, president of Seabourn.

‘I am very proud of everyone involved in building Seabourn Venture and thank our teams for helping us achieve this despite the circumstances we have faced over the past year. Our anticipation will certainly continue to grow in the months to come, upon delivery.’

Marco Ghiglione, CEO of T. Mariotti, part of GIN (Genova Industrie Navali) shipbuilding, repair and conversion group, added, ‘we thank without exception, all the people who have worked with us in allowing us to get to this point. Now, we look forward to receiving Seabourn Venture in Genoa for its completion.’

Seabourn Venture is planned to be delivered in December 2021 with an inaugural season in Norway planned for winter 2022.

The second twin expedition ship, yet to be named, currently under construction in San Giorgio di Nogaro, is expected for delivery at the end of 2022.

Both ships will be designed and built to PC6 Polar Class and Eeach will carry two custom built submarines, 24 Zodiacs, kayaks and a team of expedition experts.