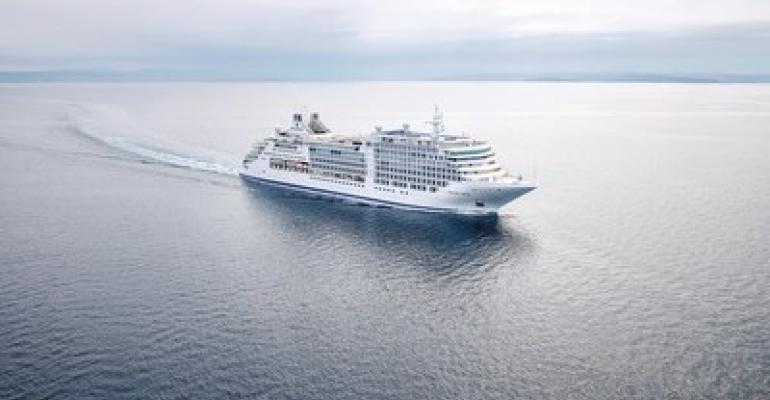 Silver Moon on its sea trials in the Adriatic

Silver Moon successfully completed sea trials in the Adriatic ahead of its planned Oct. 30 delivery from Fincantieri's Ancona shipyard.

The ship journeyed between Fincantieri's yards in Ancona and Trieste, undergoing a weeklong drydock in the latter.

Silver Moon is set to become the second ship to join Silversea's fleet in 2020, following the June 3 delivery of Silver Origin. It is the sister of 2017's Silver Muse.

During sea trials, Silver Moon carried a reduced crew of approximately 320 due to health protocols. Silversea senior officers, external engineers and representatives from Fincantieri and the Royal Caribbean Group first tested noise and vibration and stability, and inspected public spaces. During the drydock, engineers then applied the finishing touches to the ship's exterior, including cleaning and painting the hull and polishing the propellers.

Secondary tests, including speed tests, were then carried out on the return sailing from Trieste to Ancona.

During the peak months of Silver Moon's construction in Ancona, more than 1,000 professionals worked on the ship simultaneously, with over 390 companies contributing. The ship used almost 100,000 liters of paint, and over 15,000 steel plates and profiles were cut to form the superstructure; 920 tons of those were transported from 755 nautical miles away.

Twenty-year Silversea veteran Capt. Alessandro Zanello, who was at the helm the launch of Silver Muse three years ago, was also present for Silver Spirit's 2009 sea trials.

He had been scheduled to travel to Ancona in April from his home in Canada. Since flights were suspended, he was unable to reach the ship until July.

'The sea trials themselves felt special, indeed, and were held in unique circumstances. Enhanced health and safety protocols were in place, including temperature screenings, physical distancing and the wearing of face coverings both on the ship and in the shipyard,' Zanello said. 'Meal hours were extended and we ate with fewer people in the restaurant. During the sea trials themselves, we had far fewer people on board than for those of Silver Muse. Safety was the primary concern.'

Zanello added that sea trials can often be stressful, with too many people on the bridge. 'It was quite pleasant to have a more tranquil environment. Perhaps we will be forced to review our processes going forward — this could be a positive thing.

'At the end of the sea trials, we shared a celebratory glass of prosecco with the team from Fincantieri. The ship is coming on nicely and she really is looking spectacular.'

Promoted to chief engineer aboard Silver Spirit in 2017, Guido Capurro participated in his first sea trials with Silversea aboard Silver Moon.

'Approximately half the number of people were on board compared to regular sea trials. Nevertheless, we were able to carry out all tests successfully,' he said. 'Everything went really well and the ship's responses exceeded expectations.'

The son of a captain, Hotel Director Paolo Percivale participated in the launches of Silver Spirit and Silver Muse. As Silver Moon hotel director, he will oversee the entire hotel operation and manage a team of more than 350.

Just 10 days after Percivale arrived to the shipyard at the beginning of March, the lockdown was implemented and everything came to a halt. He, Capurro and other team members worked from apartments in Ancona until the end of April. After a spell back home once the lockdown ended, he returned to the yard July 1.

'It's great to finally see Silver Moon nearing completion and to experience the various enhancements we have made from Silver Muse. In the Dolce Vita Lounge, for example, a beautiful bar has been installed as the space's focal point, while La Dame Restaurant has been enriched with hand-crafted Lalique crystal panels. All public areas and suites are looking remarkable ...,' Percivale said. He will be especially excited to see the reactions of guests to the new S.A.L.T. program and its dedicaed venues.

Silversea President and CEO Roberto Martinoli thanked Fincantieri, Capt. Zanello and his officers, the line's shoreside team and 'our colleagues at the Royal Caribbean Group, who continue to strengthen our cruise line with their invaluable support. The fact that our beautiful Silver Moon nears completion, despite such challenging circumstances, is a testament to the exceptional resilience and expertise of all involved in her build.'