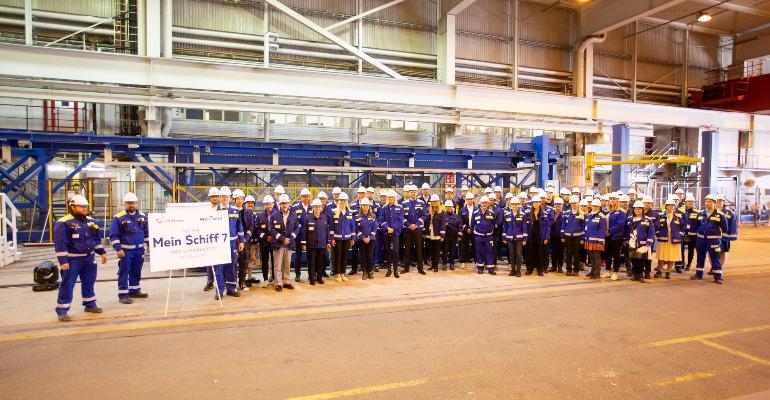 Meyer Turku cut steel for TUI Cruises' Mein Schiff 7, a ship that will intially run on low-sulphur fuel with the capability of using green methanol in future.

Cruises will be bookable from autumn this year with the vessel commissioned for 2024. The steel cutting also marks the beginning of construction for newbuilds planned by TUI Cruises that will enter the fleet by 2026.

‘After two years of the pandemic, we’re back on course and continuing our growth as planned,’ said TUI Cruises CEO Wybcke Meier, who attended the ceremony. ‘Against the background of demographic developments and German guests’ preference for German cruise products, we believe that modern newbuilds such as Mein Schiff 7 will generate annual market potential of up to 5 million cruise passengers in the coming years...’

Added Meyer Turku CEO Tim Meyer, ‘We are really excited to continue the long and successful partnership with TUI Cruises. We have again been focusing on optimizing the design in regards to energy efficiency and technologies to increase sustainability and make this ship the finest in the entire series.’

Built to run on methanol

‘The decision to prepare Mein Schiff 7 for methanol operation is an important investment in the future for us.’

For now, the ship will be powered by low-sulphur marine diesel oil with a sulphur content below 0.1% and fitted with catalytic converters reducing NOx by 75%. Emissions during its 40% time spent in port during operations will also be cut by its ability to connect to shore power.

Mein Schiff 7 will be equipped with a system that can shred organic waste through thermal treatment and process it for further use on land.

New designs and concepts will feature, as well as key elements of the Mein Schiff concept, including a high proportion of outside and balcony cabins, a wide selection of restaurants and bars, spacious outdoor areas, and spa and sports facilities with a 25mtr pool.