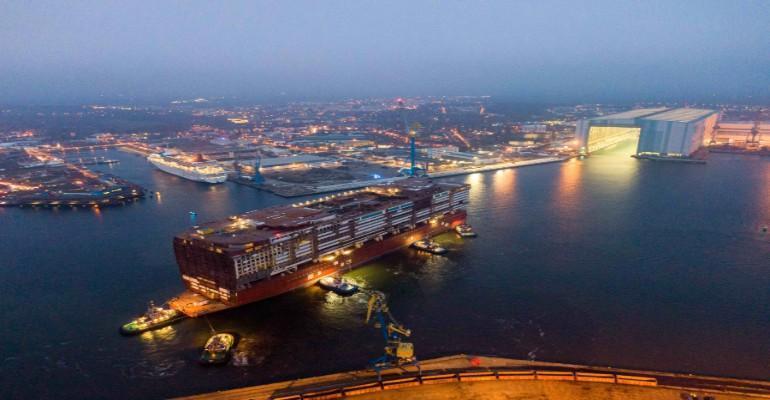 The future of Global Dream, the uncompleted 208,000gt cruise ship at MV Werften in Wismar, is completely open again after advanced sales talks ended over the weekend.

It is understood that Stena AB, one of Sweden's largest family-owned companies with global interests in shipping, ferry lines, offshore, real estate and finance, was the potential buyer.

While Stena traditionally has had a strong foothold in the ferry business, the group — according to German media reports — intended to diversify into the Asian cruise market by acquiring several of Dream Cruises' idle ships, including the uncompleted Global Dream.

These plans, however, have ended now, both reportedly as a result of continued uncertainty resulting from China's zero-COVID policy and as a consequence of KT Lim's planned return to the Asian cruise business, posing competition for Stena's new venture.

'Stena continuously evaluate different business opportunities within the segments we are active in,' Claes Berglund, director public affairs & sustainability, told Seatrade Cruise News. 'Cruise is not such segment but it's adjacent to what we normally do. I can confirm that Stena currently does not have any interest in MV Global Dream. We have been in initial contact with some stakeholders but very early and firmly concluded that we are not the right company to successfully contribute to the development of the vessel.'

In addition to Stena, at least two other unnamed buyers reportedly had been interested in buying Global Dream and completing it in Germany for Far East operations. One of those was rumored as MSC, though this was never confirmed. Recently, however, negotiations focused on one buyer.

Other parties, including LIm, reportedly have been interested in the hull, though for completion outside Germany.

In February, the administrator Morgen told Bloomberg his impression was that Lim 'would only like to buy it if nobody else would be interested in order to get it cheap and possibly to finish the ship somewhere else.'

The long-term prospects for the yard are quite promising as ThyyssenKrupp Marine Systems is apparently still highly interested in acquiring the site for naval shipbuilding. Such activity, however, needs considerable advance preparation and is unlikely to start before 2024, although it could then provide work for a great part of the yard's remaining approximately 1,500 employees.

They are currently employed by a transitional company that's supposed to operate until the end of June.

The completion of Global Dream would have provided work for the staff until late 2023/early 2024.

With the collapsed deal, the near-term prospects for MV Werften's Wismar site and its workforce are more uncertain now than they appeared to be a week ago.