Wonder of the Seas is delivered to Royal Caribbean 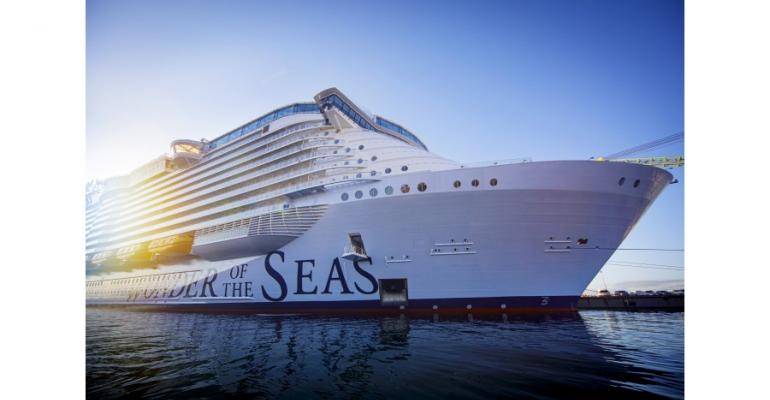 Chantiers de l’Atlantique handed over Wonder of the Seas to Royal Caribbean International at a ceremony today in Marseille.

This fifth Oasis-class ship was three years in construction and originally destined for China. It is due to debut March 4 at Port Everglades for a short series of weeklong sailings before heading to Europe in April for cruises from Barcelona and Civitavecchia (Rome). In November it begins year-round deployment from Port Canaveral.

Wonder of the Seas has been in Marseille for finishing after it sailed from Saint-Nazaire in early November following a 'technical delivery' that allowed it to leave Chantiers.

'Wonder of the Seas will energize cruising in a bolder and bigger way,' Liberty said.

30 months in the works

It is the 'culmination of 30 months of ingenuity and partnership across more than 2,000 committed crew members and workers who are among the best at what they do,' Bayley added. 'Along with taking the revolutionary Oasis-class ships to a new level of wonder, innovation and adventure, Wonder sets the stage for the spring and summer vacations families and all travelers alike are looking forward to in the new year.'

'Our teams have worked under difficult conditions but in a very united way to finally make major changes that enhanced the ship performance,' Castaing said. 'Wonder is really an outstanding new ship.'

Eight neighborhoods and other new venues

The ship has eight neighborhoods with the addition of the Suite Neighborhood and the largest Ultimate Family Suite yet, to host a family of 10.

The Mason Jar is a new restaurant and bar with live music and featuring Southern food, while Vue Bar is a new cantilevered venue with panoramic ocean views by day and a canopy after sunset. El Loco Fresh, the grab-and-go spot for Mexican food, now debuts Cantina Fresca, a bar serving 'aguas frescas,' margaritas and other Mexican staples.