Wonder of the Seas heading from Chantiers to Marseille (*updated*) 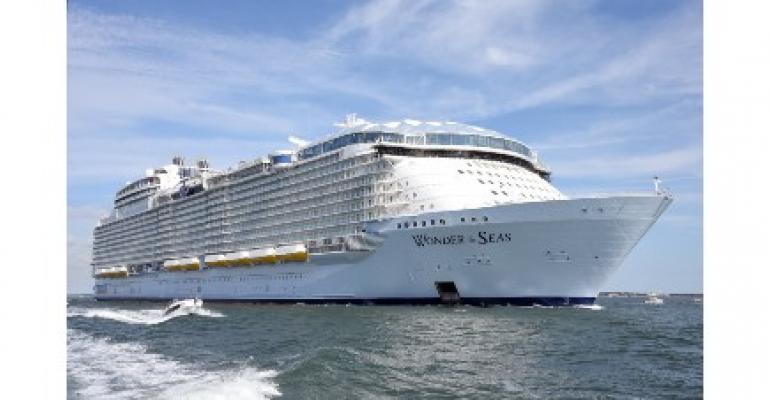 Wonder of the Seas, the new world's largest cruise ship, is scheduled to leave Chantiers de l'Atlantique Friday afternoon for Marseille where some final touches will be completed.

The ship's 'technical delivery' on Oct. 29 allows it to leave the Saint-Nazaire yard but the official handover is scheduled in January.

Planned to arrive Marseille Nov. 9, Wonder of the Seas will be allocated to Drydock 10 for some inside finishing works required by the company that haven't been defined yet.

The ship will remain under the control of Chantiers de l'Atlantique until the end of January, when it will be delivered to Royal Caribbean.

'We are proud such a company as Royal Caribbean is putting its trust in Chantier Naval de Marseille,' President Jacques Hardelay said. 'This decision also confirms our capacity to welcome and handle the largest cruise ships, as well as our very positive cooperation with Chantiers de l'Atlantique.'

Wonder of the Seas is to remain in Marseille until beginning its crossing to Florida, where it will sail weekly Eastern and Western Caribbean cruises from Port Everglades starting March 4. The ship then will embark April 19 on a repositioning cruise to Barcelona, with calls at Nassau, Málaga, Cartagena, Valencia and Palma.

Then Wonder of the Seas is to leave Barcelona for Port Canaveral on a crossing that includes calls at Palma, Valencia, Cartagena, Málaga and Nassau.

Sailings beyond that Oct. 30 trans-Atlantic voyage are not yet listed on Royal Caribbean's site and the company hasn't announced if Wonder will be homeporting in Central Florida for the 2022/23 season.

With Wonder leaving Chantiers, MSC World Europa will take its place at the C dock.

The yard will also be able to install a Goliath crane with a rail span of 130 meters and a height of 81 meters under the main girder. It will have a lifting capacity of 1,050 tons.