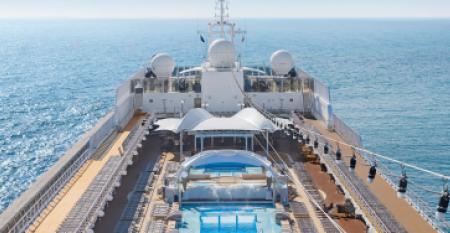 MSC Lirica to homeport in Piraeus summer 2022
Dec 16, 2021
MSC Cruises will deploy MSC Lirica to the Eastern Mediterranean market in summer 2022 and will use Piraeus as a homeport for the season.

Ponant details 2022 Greece and Croatia itineraries
Dec 15, 2021
Bookings have opened for Ponant’s summer 2022 itineraries to Croatia and Greece that run from June onboard Le...

Celebrity charts seven-ship Europe program in 2023
Oct 19, 2021
Celebrity Cruises will be sending all three of its Edge-class ships to Europe in 2023, along with four others.

Oct. 12 update: Blue Lagoon Cruises to sail as Fiji opens, Celestyal plots year-round return
Oct 12, 2021
Here's a quick read of some of today’s coronavirus-recovery cruise news. This will be updated throughout the day.

Cruising reopens between Greek, Turkish ports
Oct 01, 2021
MedCruise welcomed the re-establishment of cruises between Greece and Turkey following the Greek government's decision to lift the ban on ships visiting Greek ports after calling at Istanbul and Kusadasi.

Atlas finds a way to deliver Egypt despite one COVID case on inaugural cruise
Aug 11, 2021
While World Navigator was en route to Egypt for the culmination of its inaugural cruise, one passenger was found to have COVID...

What Seabourn's Josh Leibowitz learned from his whistle-stop ships tour
Aug 03, 2021
Seabourn President Josh Leibowitz is just back from a month of ship-hopping that took him from Greece to Cyprus, Genoa to Barbados.