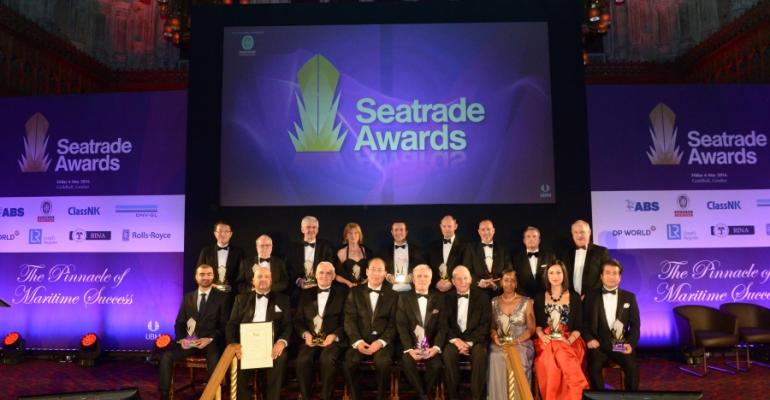 Winners of the 28th Seatrade Awards

Carnival Corp. & plc received the accolade of Global Performer of the Year 2016 at the 28th Seatrade Awards in the presence of eminent figures from across the shipping industry who gathered in London’s Guildhall Friday night.

The prestigious evening, attended by more than 350 of the maritime industry’s leading personalities, was held in the presence of the guest of honour, the IMO Secretary-General Kitack Lim.

Reading the winner’s citation, Seatrade’s global events director Vanessa Stephens said, ‘One of the largest vacation companies in the world, Carnival Corp and plc sails to all four corners of the world, attracting a customer base of 10 million guests annually that is varied in terms of culture, languages and leisure-preferences.

‘It is comprised of a portfolio of distinct brands operating in North and South America, the UK, Germany, Italy, France, Spain and Australia, and carrying passengers on 100 plus ships to the Arctic, Antarctica, South America, Australia/New Zealand, Asia, Caribbean, Alaska, Canada,  Europe, the Mediterranean, the Middle East and Indian Ocean.

‘Among several global initiatives, the company recently formed a joint venture in China that intends to establish the first multi-ship domestic cruise brand in the Chinese market and it launched a new brand Fathom giving travellers an opportunity to work alongside local people in the Dominican Republic and Cuba as part of an effort to achieve sustainable development in these communities.’

Just last week that brand embarked on the first cruise from the US to Havana in more than 50 years.

and in the Clean Shipping category, sponsored by RINA, cruise industry suppliers Becker Marine Systems, Germany (for its LNG Hybrid barge) and Thordon Bearings, Canada (for its COMPAC seawater-lubricated propeller shaft bearing system) were both short-listed and the winner was GAC EnvironHull.