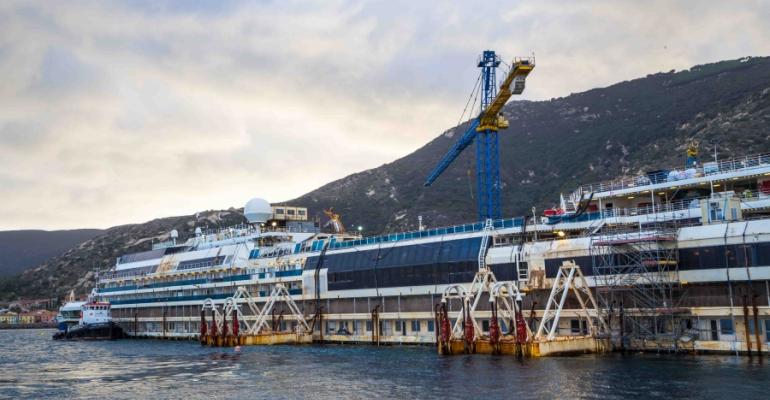 A decision on the destination for the scrapping is to be made in March
Update adds details on the schedule, the process for selecting the dismantling plan and location, speculation on the potential candidates, and costs. The Costa Concordia wreck is scheduled to be refloated and towed from Giglio by the end of June to a destination still to be determined for breaking, officials said during a media briefing Friday in Rome.

A number of companies in Italy and abroad are bidding for the scrapping. A selection is expected to be made by early March, according to Franco Gabrielli, head of Italy's Civil Protection Authority and deputy commissioner for the Concordia emergency.

Various operators are submitting proposals in a process that began by inviting expressions of interest in November. On Dec. 17, Costa and its underwriters, London Offshore Consultants, issued an invitation to tender to 12 of the companies or groups. They are from Italy, France, Norway, the UK and Turkey. The project also drew interest from a Chinese operator.

The proposals are due by the end of January, and a decision on the industrial solution and the port destination is expected by the end of February/beginning of March, Gabrielli said.

The dismantling operations could cost around 5% of the more than €600m removal project and are estimated to involve around 200 people for a two-year time frame. Italy's Ministry of Environment indicated the breaking and recycling will be conducted according to European Union rules taking effect in 2015.

'The main requirement in the selection process is the June timeline for the removal of the shipwreck from Giglio Island,' environment minister Andrea Orlando said. The breaking has drawn the interest of operators including four ports in Italy. Two proposals are related to Piombino, the closest mainland port to Giglio, plus one each from Genoa, Civitavecchia and Palermo.

'The selection of an Italian port-connected proposal will require only the towing of the semi-submerged shipwreck to the final destination, which we consider the safest solution to prevent any environmental problem during the transfer. In case of a foreign port, we will tow the shipwreck to an intermediate port and then, when the Dockwise Vanguard submersible ship already optioned will be available by late September, we will use the latter for reaching the final destination,' Orlando elaborated.

'We would prefer an Italian port, but all will depend on the availability at that stage of up-to-date harbor structures and other tender requirements,' he said.

This was echoed by Costa Crociere ceo Michael Thamm, who is 'happy to do the work in Italy,' starting with Genoa, the home of Costa's headquarters.

Scant information was disclosed about the various proposals.

However, sources told Seatrade Insider at the news conference in Rome that San Giorgio Mariotti is expected to lead in Genoa and Fincantieri is rumored for Palermo. Abroad, San Giorgio Mariotti is also a possibility in connection with Marseille in southern France, while Able UK and AF Group may be contenders in the UK and Norway. Four unidentified Turkish shipyards in the Smirne area have shown interest, as well as an unidentified Chinese operator.

Meanwhile, in Livorno, the Titan-Micoperi salvage consortium recently began outfitting the 19 sponsons that are to be affixed to the wreck in preparation for its refloating prior to the removal. Fifteen of the sponsons will go on the starboard side, where a flat, even surface will be formed corresponding to the damaged hull section, and four on port side where 11 sponsons were installed for the parbuckling. This makes a total of 30 needed to refloat the vessel.

Installation of the sponsons is to begin in April and be completed by mid-June, depending on weather conditions, according to Franco Porcellacchia, Costa's project manager for the removal.

Porcellachia estimated the refloating, a challenging process, will take seven to 10 days, and then the ship will be ready for transport.

According to the latest Costa estimate, the Concordia removal and dismantling is expected to exceed €600m, funded entirely by the company. Almost 60% of the €435m already spent, or €261m, has gone into the Italian economy, according to Costa's Thamm. The US follows at just under 21%, the UK at about 12%, the Netherlands at just under 4% and Germany at just under 3%.

Capt. Francesco Schettino is battling charges of manslaughter, shipwreck and abandoning ship at a trial scheduled to resume Monday in Grosseto but likely to be delayed by a nationwide lawyers' strike.