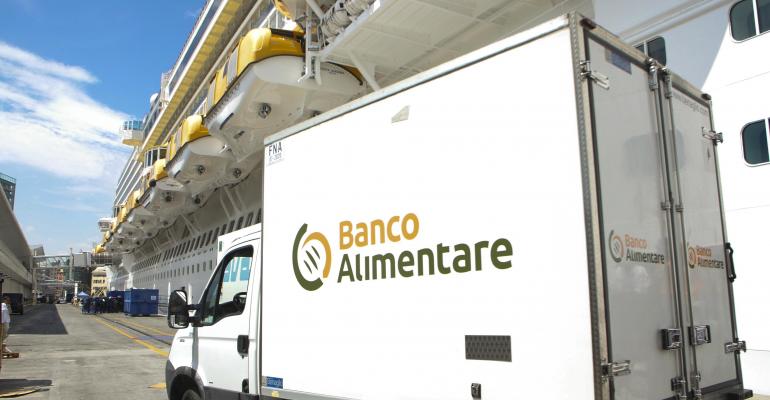 Every Saturday when Costa Diadema arrives in Savona, the surplus food will be picked up by the food bank for distribution to the needy
Surplus food on Costa Cruises ships will now be put to good use—helping hungry children ashore—in a new partnership with an Italian food bank.

The project, launched Saturday aboard Costa Diadema during its Savona call, involves collecting food that has been prepared but not served in the ship's restaurants and distributing it to a local organization that helps children in need.

On hand were Sen. Maria Chiara Gadda, who sponsored a law that facilitates the donation of surplus food, and Sen. Andrea Olivero, Italy's deputy minister of agriculture, food and forestry. Olivero said the Costa initiative shows that the law against food waste, in force since last September, is working, and has triggered a cultural change.

'Today, this ambitious project is sending an important message: retrieving surpluses even in the most complex situations is not just a pipe dream, but it is genuinely achievable if everyone takes on their share of responsibility,' Gadda added.

When the law came into effect, the food bank Fondazione Banco Alimentare Onlus worked with Costa for eight months to organize a food surplus management procedure to salvage high-quality food with high nutritional value, according to Andrea Giussani, president of the foundation.

'From now on,' he added, 'we will be focusing on extending this best practice to other ports in Italy, and we hope that all stakeholders will collaborate, as has happened in Savona.'

'We are beginning with Savona and our flagship Costa Diadema, but the common goal is to involve more and more ships and ports in Italy and the Mediterranean,' Costa president Neil Palomba said.

He explained that since preparing food to be offloaded is a unique occurrence, this led to the direct participation of the Customs Agency and Maritime Health Organization Agency in putting the finishing touches on the procedures for delivery.

'All this is a starting point,' Palomba said, 'for anyone who wants to join us in the maritime sector.'

Costa Diadema calls at Savona every Saturday. On Friday after dinner all dishes prepared in the restaurants and not served—the 'ready to eat' meals—will be placed in special aluminum containers that are sealed and labeled to ensure they can be traced, and then stored in the refrigerators on board. The next morning, when the ship docks at Savona, the containers are offloaded and delivered to Banco Alimentare volunteers.

They're taken to Varazze, a nearby town, to the Fondazione L'Ancora, which runs a home for 20 children and provides food aid to more than 280 people in need, including refugees.

Fausto Romano, director of the Fondazione L’Ancora Onlus, said the program means it can provide varied and excellent quality food to people who are facing difficulties. And, from an educational perspective, he added, reducing waste and food as a gift is an 'important communication and growth tool for the children.'

Law 166/2016, called the Gadda Law, simplified the regulatory framework concerning donations of unsold foods, making it easier to donate food in a controlled and safe way and prioritizing that surplus food goes to the neediest people.