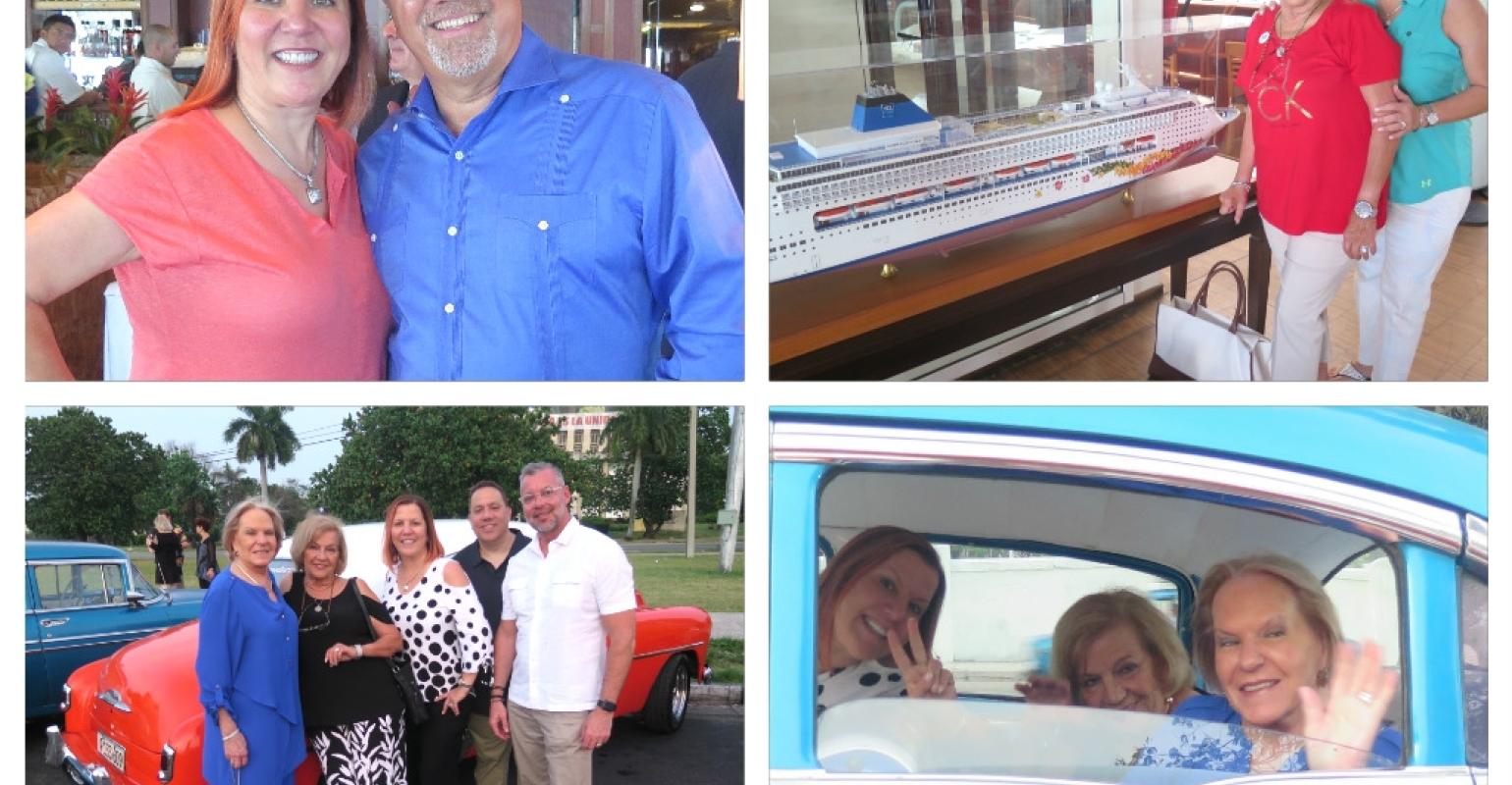 From top left, clockwise: Vicky Garcia with Frank Del Rio aboard Norwegian Sky, Vicky and her mom with a model of the NCL ship in Terminal Sierra Maestra, touring Havana in a classic car, a stop at Plaza de la Revolución

For Cruise Planners' Garcia and her Cuban-born mom, NCL cruise was 'magical'

Like many living in South Florida and working in the cruise industry, Cruise Planners' Vicky Garcia is of Cuban descent. So the opening of Cuba to US-based ships after more than 50 years has a special meaning for her and her family.

Recently Garcia, co-owner and chief operating officer at Cruise Planners, was invited to join Norwegian Sky's inaugural Cuba cruise. She took her mother Elda, who left the island at age 15 in 1957 and had never been back since.

'Years ago, I said Mom, let's go back,' Garcia recounted. 'She always said "No, I never left anything behind."'

Most of Elda's family left during the Batista dictatorship, and she finished high school in Miami. Vicky's late father, who had studied at the University of Havana at the same time as Fidel Castro, left in 1959 and reunited with his girlfriend, Vicky's future mom, in Miami where he started an accounting business and they married.

But Elda Garcia said yes to the Norwegian Sky cruise and for two days she and Vicky explored Havana, having one memorable experience after another. They were greeted with open arms at a tiny bar in Old Havana, bought art during a ship's shore excursion that visited two community art projects and rode in a classic car to landmarks like Plaza de la Revolución en route to the famous Tropicana nightclub.

'That night was magical,' Garcia said of the Tropicana. Her mother had never been there as a girl; she was too young for what was considered a risque show. 'She loved it,' Vicky said. When the music started, Elda got teary-eyed; she knew all the songs.

For Vicky, born and raised in Miami—so close but yet so far away, for many years, from Cuba—'to be in Cuba, listening to Cuban music, was surreal.' There was live music 'everywhere you went,' she said, with handfuls of musicians playing at many bars and restaurants. She also found the architecture surreal—'so beautiful'—and seeing many buildings webbed in scaffolding, she's heartened they'll be restored to their original charm.

'The people are so warm and friendly,' Garcia added, citing the tremendous hospitality she and her mother experienced. At a hole-in-the wall bar in Old Havana, the proprietors, a family, made room for the Garcias. When Vicky said her mom was Cuban, they hugged her, brought out food and 'just rolled out the red carpet.' Before leaving the Garcias were given markers to add their names to the walls that were dense with signatures from all over the world—most dated 2017.

There were moments of sadness, too, when shortages became apparent. Sometimes items listed on restaurant menus weren't available: 'You would ask for a dish and they'd say we don't have it.'

Garcia thinks going by ship is nice because 'you take your hotel with you.' In 1991, she had traveled to Cuba for the first time to take clothing and money to family friends. She remembers daily power outages, broken elevators and water shut-offs.

A cruise is a good way to sample Cuba, in her opinion, and then go back on a longer land tour.

Now Garcia is planning a return trip of a week or longer with her mother and friends. Some of the places they want to revisit from their shore excursion include Fusterland and Muraleando, community arts projects where they made purchases, including a painting by a special-needs child. They'd also like to venture beyond to see Cienfuegos and other areas of the country.

Cuba is 'definitely a hot topic' among Cruise Planners' home-based agents who sell a variety of cruises and land tours. They have a closed Facebook group where they share information, and Garcia is putting together a Cuba webinar.

Some take-aways from her experience: Havana is 'super-safe; you never feel threatened.' That goes for shopping and vendors; nobody presses for a sale. No credit cards are accepted, so travelers should take plenty of cash.

'It's really easy to get off the ship and get CUCs (the currency for foreigners) exchanged at the terminal. They make it super-easy,' Garcia said. Terminal Sierra Maestra sits in the most historic part of Havana, easily walkable.

'It was almost like you spent it with family. To be with so many cruise industry friends was pretty magical.'