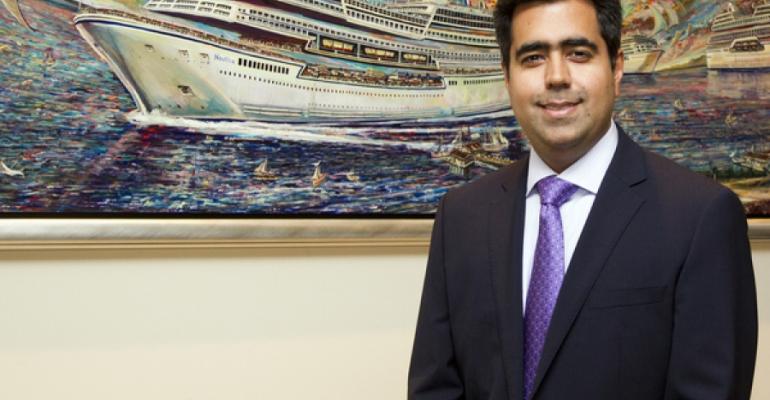 Kunal Kamlani - a bright future in the Norwegian group
Prestige Cruises' Kunal Kamlani, president and chief operating officer, will receive an annual base salary of $750,000 under a new Nov. 19 employment agreement with an initial one-year term, that is automatically renewable. Beginning in 2015, he will be eligible for an annual bonus with a target amount equal to 75% of his base salary, and his 2015 bonus is guaranteed to be at least $562,500, according to a filing.

With Wednesday's closing of Norwegian Cruise Line Holdings' acquisition of Prestige, Kamlani also became eligible for a $500,000 transaction success payment that will be paid in $250,000 installments in 2015 and 2016. Plus, he became eligible to receive options to purchase 150,000 ordinary NCLH shares. The option grants have an ordinary term of 10 years.

Under the Norwegian umbrella, Kamlani will be able participate in the benefit plans available to other Norwegian senior executives, including medical executive reimbursement. And he will get a $1,500 monthly car allowance and four weeks of vacation per year.

He likely has a bright future in the Norwegian group. CEO Kevin Sheehan views Kamlani as 'a good guy' and has said there's a good rapport.

Kamlani, 42, has served as Prestige president and chief operating officer and Oceania president since September 2011, and Regent president since February 2013. He had rejoined Oceania in September 2011 from Bank of America/Merrill Lynch, where he led the multibillion-dollar Global Investment Solutions division with approximately 1,000 employees worldwide. Prior to that, Kamlani was cfo of Prestige from August 2009 through March 2010.