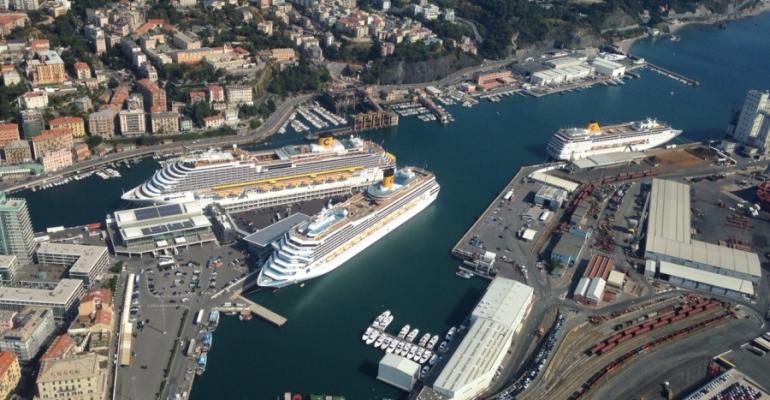 The cluster of Ligurian ports headed by Genoa, La Spezia and Savona, plus six smaller harbours, is expected to welcome 2.54m passengers this year, maintaining its lead as Italy's busiest cruise region.

In  2014, the nine ports handled 2.38m cruise visitors and 930 ship calls representing 23% and 19% respectively of overall Italian port cruise traffic last year, and accounting for a 5% and 12% increase compared to 2013.

Speaking at the Italian Cruise Day 2015 held last week in Civitavecchia, Gianluigi Miazza, the president of Ligurian Ports Alliance, and president of Savona’s port authority said 2015 is expected to see a slight increase compared to last year, confirming its lead position. 'Savona is expected to total around one million passengers, Genoa will level at circa 810,000 and La Spezia will reach a figure of 646,000,' he commented.

According to Italian Cruise Watch 2015, the national analysis published yearly by Risposte Turismo, the three main Ligurian ports are due to receive 234, 190 and 174 calls respectively.

2016 figures are even higher, highlighted Miazza, 'with the three main Ligurian ports set to welcome around 2.65m passengers with Savona and Genoa both expected to top the one million milestone.'

He believes the positive figures are due to the infratsructure investments undertaken at the three main ports.

In 2014 Costa Cruises and Savona Port Authority inaugurated a second dedicated cruise terminal at the MedCruise member port as well as the Ceramic museum. 'In May 2015 we opened the mobile bridge, which unifies the city with the port. At the end of November the new Apple Museum 3.0 will open, with its "unique" collection of Apple computers through the ages which is locatedin the heart of Savona’s old port (Darsena).'

Since 2001, Genoa has invested €70m in cruise dedicated infrastructure, and will complete the investment program by puttitng into service two new passenger boarding bridges for the latest designed cruise ships at Ponte Doria pier, accounting for the remaining €2m spend.

MedCruise member La Spezia recently inaugurated a second cruise passenger terminal, which is already operational. The La Spezia’s port authority president Lorenzo Forcieri unveiled a project to jointly manage with La Spezia’s city hall, the local Italian Navy Museum to make it an important attraction. 'We are also working on an integrated welcoming package with local businesses to provide new opportunities for both guests and crews, including a newly established free wifi network in the waterfront and other city districts,' he mentioned.

The Italian Cruise Day 2016 will be hosted by La Spezia.