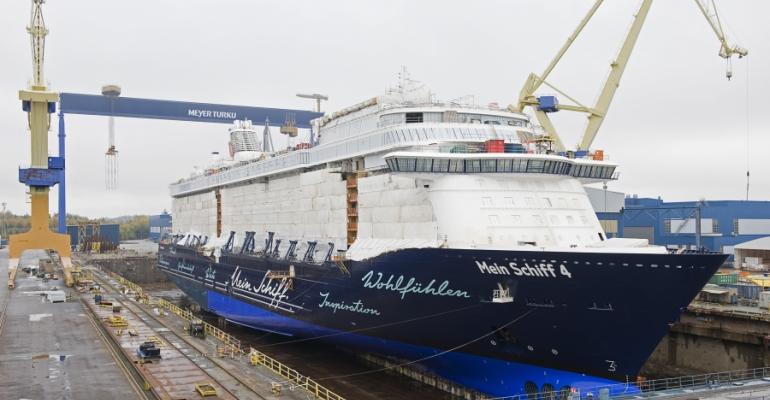 Finland’s Turku shipyard celebrated a historical day Friday with the floating out of Mein Schiff 4, just three weeks after the yard’s change of ownership. Jan Meyer, ceo of Meyer Turku Oy, and Wybcke Meier, the new ceo of TUI Cruises opened the valves to flood the dry dock.

Mein Schiff 4 will be handed over to the German operator in spring 2015.

Next summer, the new ship will sail in the Baltic Sea, in northern Europe and Norway before heading off to the Canary Islands, for weekly sailings to Morocco or Madeira.

Production work on next ship of the series, Mein Schiff 5, will begin next month, and Mein Schiff 6 one year later.

‘This day is special in many ways. We have the opportunity to witness the float-out of the first newbuild of Meyer Turku. I am very pleased that Mein Schiff 4 is right on schedule,’ said Meyer.

It was Meier’s first official act in her new role as chief executive of TUI Cruises and she called the event, ‘a fantastic beginning’.

The 99,500gt Mein Schiff 4, 5 and 6 are about 294mtr long with 2,500 lower berths and a crew of 1,000, bringing approximately 5,000 person-years of labour to Meyer Turku shipyard and a significant amount of labour for the Finnish maritime industry network as well. The domestic content of the ships is approximately 80%.