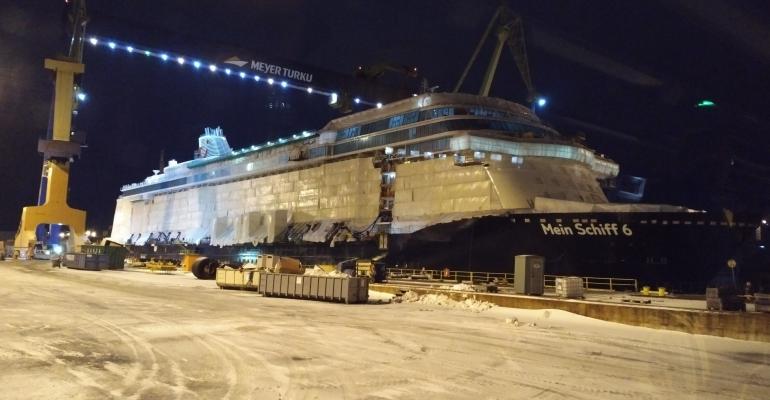 The recent contracting spree by major cruise lines has provided some welcome relief for specialist European builders. Meyer Turku deputy ceo Tapani Pulli revealed that recent orders and two ships which are the subject of MoUs but not yet confirmed orders, could mean that the yard is full until 2023 with work in hand extending beyond then.

Following delivery of the 2,800-passenger LNG-powered fast ferry Megastar operating under the brand Tallink Shuttle between Tallink and Helsinki tomorrow, the shipyard will concentrate solely on large cruise ship construction. Pulli said that the shipyard’s strategy will be to focus on vessels of 150,000 gt and above.

He admitted to some concern over Asian yards’ advances on the cruise sector. 'We have to be faster, focus on energy efficiency, and stay a step ahead,' he said, citing investment in automation and new welding technology at Meyer Turku.

He also highlighted a project to adopt fuel cell technology in future cruise ship power systems and the yard is understood to be working with Royal Caribbean International on this.

The cruise line could introduce fuel cells on its two unconfirmed Icon-class vessels which are likely to have a tonnage of about 200,000 gt or slightly more. If confirmed, it is understood that these ships would be delivered in 2022 and 2024.

Last year’s contracting spree followed a cruise sector downturn and it will take the yard another two years to reach production levels attained in 2010. However, the deputy ceo revealed that the yard is taking on a significant number of new recruits and has established its own in-house training set-up similar to an apprenticeship programme.