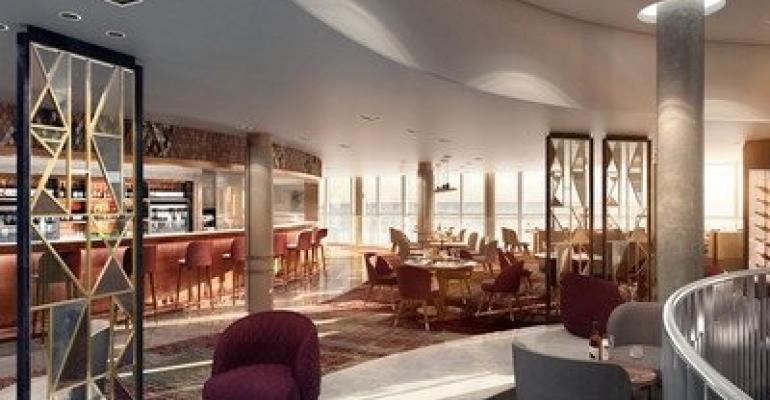 In its next reveal of fleet firsts for P&O Cruises, newbuild Iona will have a gin distillery onboard, a music playlist created by Alex James and 95 innovative 274 sq ft Conservatory Mini-suites featuring an additional lounge area with floor to ceiling glass and sliding door between the main cabin area and balcony.

These additions were announced last night at a pop up cinema event in London hosted by P&O Cruises’ resident wine expert Olly Smith and other guests.

The interactive event took invited media through ‘A day in the life of Iona’ with food and drink to match the visual experience.

Smoked haddock vol-au-vents were served followed by smoked salmon squares (in honour of Iona’s maiden 2020 summer season in the Norwegian Fjords, then beef wellington parcels cooked by Marco Pierre White and finishing with raspberry and chocolate pastries served up by another of P&O Cruises’ Food Heroes, master pâtissier Eric Lanlard.

Following the success of Britannia’s gin bar, which serves 30 different varieties of the spirit, Iona is going one step further and will have its own gin distillery.

British/Norwegian fine spirits writer Joel Harrison told the audience, ‘gin is in’, and currently the most popular drink onboard. In the UK alone, 19m litres of gin were drunk in the UK last year, he said.

Wine is Smith’s passion and his signature The Glass House will also feature on Iona.

P&O Cruises has chosen former Blur bassist, writer and cheesemaker Alex James to curate the onboard music playlist for Iona(his cheeses are already offered in selected onboard restaurants). ‘Different people want to listen to different music and the same people want to listen to different things on different days so whether it’s in 710 a cosy adult hideaway, or the Limelight Club, or evenings in SkyDome, there will be music for everyone’s taste,’ commented James.

Paul Ludlow svp P&O Cruises revealed there will be just one formal attire gala night on Iona’s weekly cruises and that will be across all of the restaurants on the ship apart from the buffet.

Ludlow told Seatrade, ‘we are very excited about Iona, our biggest ship yet, and the variety of choice points created as a result of three year’s worth of customer research.’