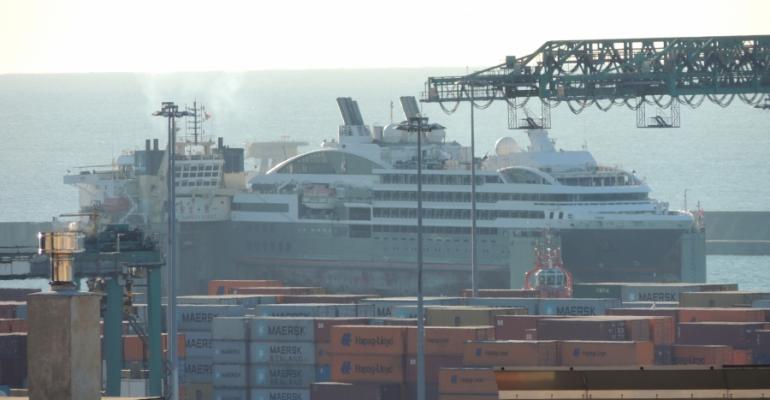 Ponant's Le Boréal, which lost power after an engine room fire on Nov. 18 near the Falklands Islands, has been transported to Genoa for repairs by Fincantieri shipbuilding group under a turnkey contract, according to local sources.

Fincantieri built the 10,944gt ship at its Ancona yard in 2010. The value of the repair contract was not disclosed. The work will be undertaken at Genoa Port's Ente Bacini dock number 3, temporarily managed by Fincantieri.

No details have been provided by the owner, but Seatrade Cruise News understands the work will take around 12 weeks before sea trials. The ship is scheduled to return to service for a May 9 cruise from Lisbon.

The damaged Le Boréal was loaded aboard COSCO Heavy Transport’s Kang Sheng Kou, a heavy lift vessel, in Punta Arenas, Chile, on January 15 by Dutch Offshore Contractors. The ship had languished in Punta Arenas for two months after being towed from Port Stanley.

The heavy lift vessel arrived off Genoa Port on Friday and was due to start the offloading of Le Boréal on Saturday. However, poor sea conditions including high waves in the roads led to the Italian Coast Guard requiring the operation be conducted in the inner waters of nearby PSA Voltri-Prà terminal.

The unloading and floating-out operations took around six hours, according to the Italian Coast Guard, and were safely completed with the assistance of Genoa Port pilots. Rimorchiatori Riuniti tugs subsequently towed Le Boréal from Voltri-Prà to Genoa port, where it entered the dock for repairs to begin.