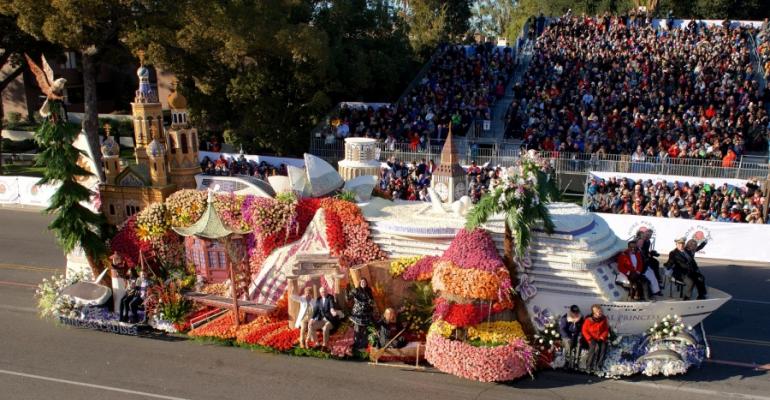 With its New Year's Day premiere in the 126th Rose Parade, Princess Cruises kicked off its 50th anniversary celebrations before millions of viewers. The line's float, '50 Years of Inspiring Travel,' featured the six original cast members of 'The Love Boat.'

They rode down the 5.5-mile parade route in Pasadena, California, aboard a floral bedecked depiction of Regal Princess sailing through destinations and landmarks the line has visited over the past 50 years.

The theme for the parade was 'Inspiring Stories.'

Princess conducted a contest asking past passengers to share an inspiring story that occurred aboard a Princess cruise for a chance to ride on the float. The grand prize winner was World War II veteran Nathan Keith Abbott, 91, who took a Princess cruise back to the South Pacific. He had long wished to revisit the islands where he served during the war.

Other riders who were selected told their inspiring stories about a variety of special celebrations including an engagement in front of a glacier in Alaska, a renewal of vows to mark 50 years of marriage, a celebration of life after surviving breast cancer, and a mother and daughter college graduation cruise to celebrate both receiving their degrees.

As a tribute to Princess’ 25,000 crew members and employees around the world, the float incorporated flower vials that were personally signed by 16,0000 employees, signifying their important role in the company’s success.

The float was awarded the Craftsman Trophy for Exceptional Achievement in Showmanship and Dramatic Impact.