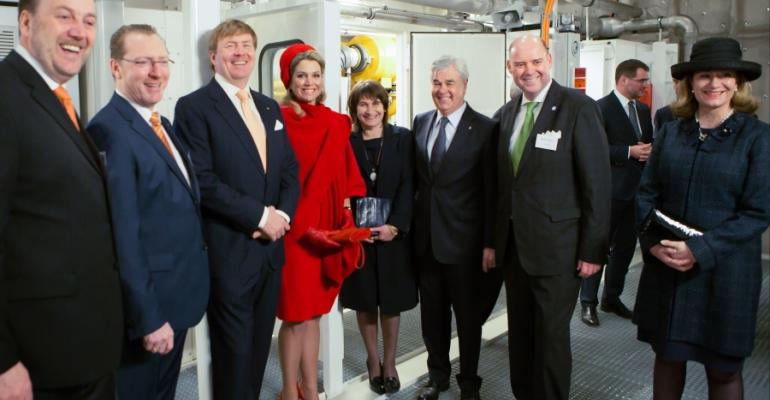 Attending a conference on the use of liquefied natural gas in the maritime industry, Friday, His Majesty King Willem-Alexander and Her Majesty Queen Máxima paid a visit to the world's first LNG Hybrid Barge in Hamburg.

The Dutch royal couple learnt first-hand about the innovative and environmentally friendly technology and were both enthusiastic about it.

'We're delighted to welcome such noble guests and we appreciate the Dutch royal couple's interest in this in this project, which is the first of its kind in the world,' Michael Ungerer, president of AIDA Cruises, said.

'The Netherlands have become a trailblazer in the use of LNG for supplying ships with energy. We are confident that we will celebrate a premiere in early 2016 in Rotterdam, when AIDAprima  as the only cruise ship equipped with a Dual Fuel Engine so far  will be supplied with LNG for its production of energy for the first time in the Netherlands.'

Starting this season, AIDAsol will for the first ship to be supplied with electricity produced from LNG in a test run while it is berthed in the Port of Hamburg.

Compared to the use of conventional marine diesel with 0.1% sulfur content, no sulfur oxides and no soot particles are emitted. Nitrogen oxide emissions will be reduced by up to 80% and carbon dioxide emissions by 30%.