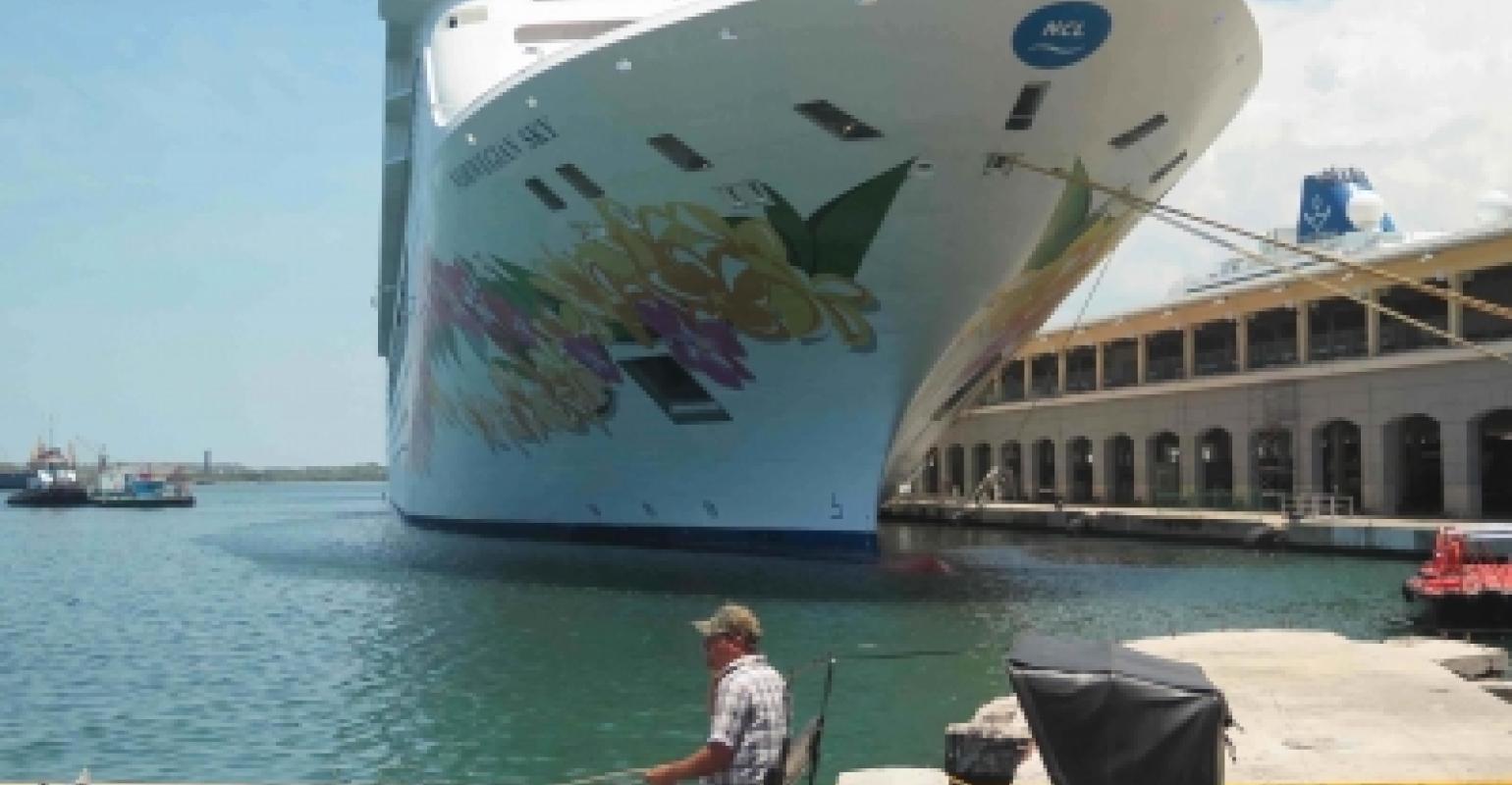 Major cruise operators said itineraries are sailing as scheduled for now, and a Cuba expert advised travelers it's 'business as usual' since new regulations have not been issued. Pictured: Norwegian Sky in Havana PHOTO: Anne Kalosh
Update adds Bruce Nierenberg's views about which lines could be harder hit by the uncertainty of potential changes President Trump's tightening of restrictions on Cuba—driven by the country's support for the embattled government of Venezuelan President Nicolas Maduro—has sparked concerns about the potential impact on cruises.

On Wednesday in Miami, national security adviser John Bolton charged that Havana 'continues to prop up Maduro and help him sustain the brutal suffering of the Venezuelan people.' New measures Bolton announced include limits on non-family travel to Cuba and a cap on the amount of money US families can send their Cuban relatives.

The Trump administration also announced a new policy allowing Americans to sue foreign firms operating in properties Cuba seized from them following the 1959 revolution. This would enable lawsuits against foreign companies that operate from hotels, distilleries and other properties Cuba nationalized after Fidel Castro's takeover.

Morningstar speculated, without attribution or detail, that the new restrictions 'may mean the end of US cruise ships calling on Cuban ports.'

What the cruise lines are saying

However, operators contacted by Seatrade Cruise News said no new regulations to that effect have been issued.

'We are closely monitoring recent developments with respect to US-Cuba travel,' a Norwegian Cruise Line Holdings spokesperson said. 'At this time no new regulations have been issued and accordingly, the company’s itineraries which include Cuba as a destination will continue as scheduled.'

Royal Caribbean said: 'We’re reviewing the recent statements to evaluate their impact on our guests and our company. For now, we are sailing our Cuba itineraries as scheduled and will keep our guests updated if anything changes.'

A Carnival Corp. & plc spokesman was not immediately available to respond about Cuba.

Collin Laverty, president of Cuba Educational Travel, strongly decried the Trump administration's actions as an 'effort to reinforce a policy that has failed miserably for 60 years to accomplish anything positive in Cuba.'

Laverty called this 'a sad day for Cuba and a sad day for America,' adding: 'The only winners here are a handful of members of Congress and those stuck in the past that support them. The losers are millions of Cubans on and off the island and the overwhelming majority of Americans that support engagement with Cuba.'

For now, 'business as usual'

Laverty told Seatrade Cruise News it's unclear if cruise operations could be at risk since no details were provided. He advised travelers to 'stay calm and keep an eye out for more news about what the actual changes will be.' Wednesday’s announcement was 'very general and did not include any details about what changes will be implemented and what the process and timeline will be.'

He added: 'Until the Treasury Department issues new regulations in writing, it’s business as usual.'

Laverty anticipates any travel reservations made before the policy change would be warranted and allowed to take place as planned.

Airlines, he said, 'will surely be impacted regardless of how severe or moderate the changes are once made public. It could go either way for the cruise industry: little or no impact to a complete suspension of Cuba as a destination.'

Nierenberg was helming Victory Cruise Lines in 2017 when the company received berthing approvals from Cuba in the spring for a full season of voyages in late 2017 and early 2018.

'We sold out the space in one week for the whole season. Hooray,' he said. 'Then the US side decided to make it sound like they were changing things radically when in fact going on a ship was even better than before the Trump rule changes. However, the damage was done.'

According to Nierenberg, the mature market Victory served is 'very security conscious. They don't go where there are security warnings or trip uncertainty. We suffered cancellations.'

When the Trump administration later issued rules making it clear that cruises could continue, it didn't matter since customers had already decided to 'wait until next year,' Nierenberg said.

He finds a similar situation now: 'No details, no dates, no certainty ... but plenty of uncertainty.'

Nierenberg doesn't think the major lines will be impacted but the smaller operators of longer cruises with multiple stops in Cuba could suffer.

'The mass market [lines] will rebound and their guests are more flexible. The seniors and affluent, on the other hand, are not,' he said.

That's a shame for Cuba, too, Nierenberg added, since the small-ship operators provide economic benefit to more people around the island by visiting ports beyond Havana.