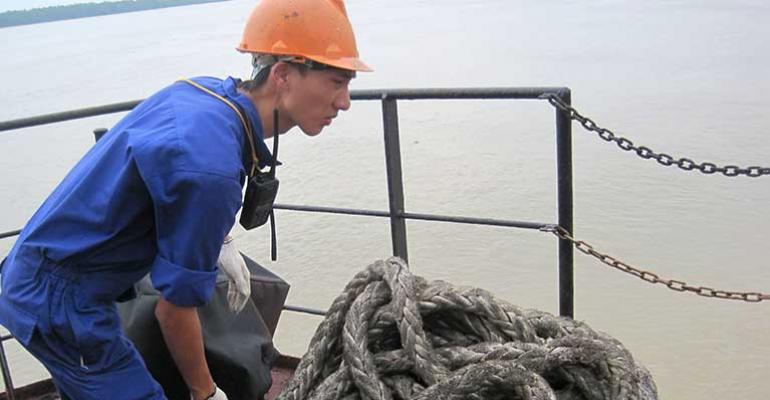 More than 200,000 seafarers remain stranded at sea, according to ILO

In the latest push to resolve the crisis of stranded crew, 13 countries are urging all IMO states to accept seafarers as 'key workers' who should be permitted to cross borders and access commercial flights.

'The inability of ship operators worldwide to conduct ship’s crew changes is the single most pressing maritime operational challenge to the safe and efficient movement of global trade,' said government representatives in a joint statement signed during today's virtual International Maritime Summit hosted by the United Kingdom.

This will speed up repatriation: ILO

The International Labor Organization welcomed the statement and urged its implementation. ILO said the agreement will lead to the opening of borders for seafarers and to an increase in the number of commercial flights, which will speed up repatriation efforts.

Seafarers have been among the hardest hit from the fall-out of the pandemic, according to Corinne Vargha, director of the ILO’s International Labor Standards Department.

While delivering a key service to society, they face safety and health risks and, increasingly now, physical and mental exhaustion, due to their inability to return home or to join their ships because of measures taken to stop the spread of the virus.

More than 200,000 seafarers remain stranded at sea, according to ILO. Though not specified, tens of thousands of crew are still believed to be stuck aboard cruise ships around the world.

The governments that took part in today's summit urged all IMO members to take any necessary measures to ensure safe crew changes and repatriation.

They also pledged to consider the legal possibilities for accepting internationally recognized documentation such as International Convention on Standards of Training, Certification and Watchkeeping for Seafarers certificate, the International Labor Organization Seafarers’ Identity Document (ILO 185) and a letter from the seafarers’ company, carried by seafarers, as evidence of their status as key workers, and purpose of their travel and movement for crew changes.

They further agreed to engage nationally, multilaterally and bilaterally in discussions about implementation of the recommended protocols for ensuring safe crew changes and travel during the coronavirus, circulated to IMO member states as Circular Letter No.4204/Add.14 dated May 5.

In addition, the nations pledged to review the necessity of any restrictions that may continue to apply, at national and/or local level, to the movement of seafarers, including the possibility of allowing exemptions from quarantine or similar restrictions in accordance with relevant international rules or health regulatory guidelines.

They also agreed to consider temporary measures including the possibility of waivers, exemptions or other relaxations from any visa or documentary requirements that might normally apply to seafarers.

Further actions pledged are to work with the International Civil Aviation Organization and the aviation industry to increase access, as soon as possible, to commercial flights to and from the principal countries of origin of seafarers and the airports in reasonable proximity to those seaports where crew changes are effected.