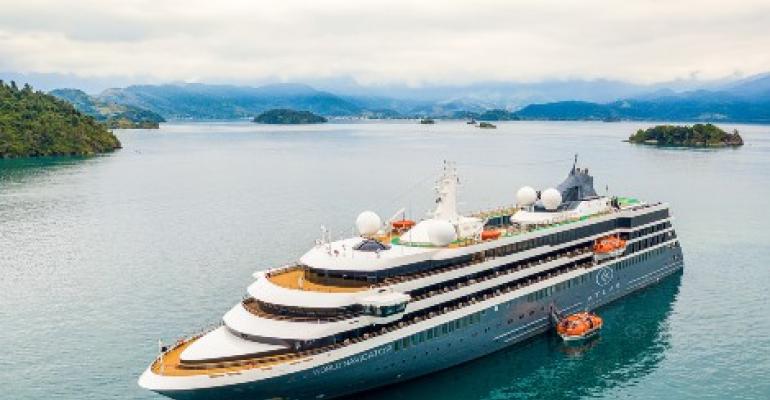 Twenty-four departures of six to 16 nights are planned.

The line's 'All Inclusive All The Way' proposition includes round-trip air travel from 16 major US and Canada gateways, choice of a shore excursion at every port, prepaid gratuities and premium wine and spirits.

Travel advisors get $200 gift card for each new booking

For a limited time, travel advisors earn a $200 gift card for each new booking with deposit for any of these new 2022 itineraries.

World Navigator combines Bordeaux and the Douro Valley on the June 8 and Sept. 19 voyages, the first traveling the Thames to dock at London's Tower Bridge, while the second transits the Kiel Canal. Both voyages visit Honfleur, France, for excursions to Normandy’s beaches and Paris. Because of its small size, World Navigator can dock in Bordeaux’s city center.

In May, three cruises showcase destinations along the Spanish, French and Italian rivieras on eight- to 13-night itineraries. The first two turn around at Civitavecchia (Rome), with the May 1 voyage covering all three Mediterranean rivieras. The May 14 departure focuses on Corsica, the Amalfi Coast and Sorrentine Peninsula. The May 31 cruise embarks at Nice, France, traveling via Spain’s Catalonian Coast to Lisbon, Portugal.

From the British Isles, World Navigator continues north to the Norwegian Fjords and further to Svalbard, with opportunities to view Artic wildlife such as polar bears. Weather permitting, travelers can kayak and glacier hike at the Monaco or Smeerenburg glaciers.

World Navigator closes the season with five voyages that access the Southern Caribbean, Andean cultures and Patagonia. Departing Barbados on Oct. 18, World Navigator will visit Aruba, Bonaire and Curaçao, Colombia and Panama, while the subsequent sailing features a Panama Canal transit en route to ecoadventures in Costa Rica. The Nov. 5 voyage explores Ecuador and Peru, concluding with an overnight at Callao (Lima). The following Peru and Chile voyage also begins with a Callao overnight and features a visit to Pisco (Paracas Bay).

The season concludes with a 12-night Patagonia expedition through the Straits of Magellan from Valparaiso, Chile, to Ushuaia, Argentina, with opportunities to explore Tierra del Fuego. An overnight at Puerto Natalas gives access to Torres Del Paine National Park, a UNESCO World Biosphere Reserve.