Celebrity Beyond is bigger, with bevy of expanded and new spaces 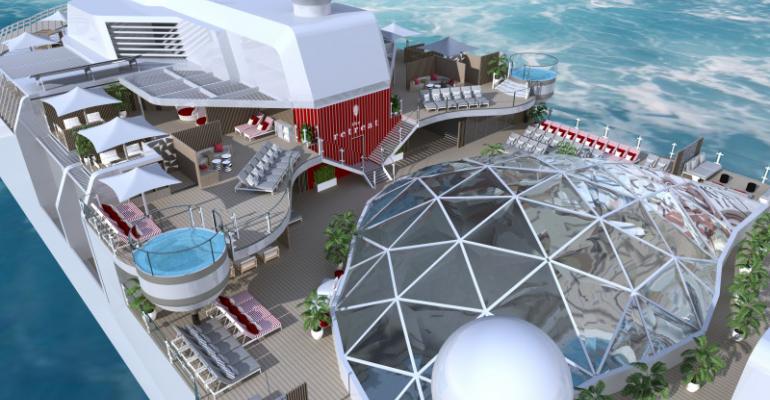 Celebrity Beyond's Retreat Sun Deck is 40% larger and spread across two levels, which enabled designer Kelly Hoppen to provide more intimate, 'Zen' spaces
The third Edge-class ship, Celebrity Beyond, is 20 meters longer with a bevy of new and redesigned spaces.

And the Magic Carpet returns.

The changes will be 'beyond what anyone is going to expect,' Celebrity President and CEO Lisa Lutoff-Perlo said during a virtual reveal with the designers on Wednesday.

Architect Tom Wright's design not only lengthened the ship but raised it to 17 decks, allowing for reimagined spectacular outdoor spaces The Retreat, the Resort Deck and the Rooftop Garden. The latter has even more wind spoilers and new, cantilevered float pools extending 6.5 feet over the side of the ship.

The Resort Deck has new sunken seating areas, and an eye-catcher at the head of the 25-yard lap pool is the sculpture of a man balancing an elephant atop his back.

Edge-class design ambassador Nate Berkus got to create his first space for Celebrity, and his multi-level Sunset Bar aft aims for 'aspiration and up-market relaxation,' as he put it. Besides Moroccan tiles, arches and terraced seating are conversation niches with banquettes.

'You dine in these lanterns,' as Jouin Manku's Sanjit Manku described them. 'You'r bathed in light and everyone looks beautiful.' Diners enter from a quiet vestibule and leave through a Boulud boutique where they're offered a customized sweet and souvenirs of the dinner are available.

Manku explained how an additional 10 meters allowed the expansion of the Grand Plaza at the heart of the ship. It has an airier feel, a dance floor to one side and terraced seating on the other, an enlarged Martini Bar and a new-design monumental chandelier.

When it came to the suites, designer Kelly Hoppen created the fleet's largest Iconic Suite and redesigned the Edge Villas. For other suites, she merely refreshed details and accessories.

As for the suites restaurant Luminae, relocated to the front of the ship, 'I let myself go wild,' Hoppen said. She wanted patrons to return and sit every night in a different corner for a new experience there.

One of Lutoff-Perlo's favorite places

And for the Retreat Sun Deck — which Lutoff-Perlo singled out as one of her favorite places — Hoppen had 40% more space to play with, across two levels. She said that actually afforded the opportunity to create more intimacy; she added 'solitude spaces, Zen areas where people can chill.'

More to come on the AquaClass SkySuites, with floor-to-ceiling ocean views, verandas, luxurious bedding and other wellness amenities. Also, stay tuned for some added food and beverage experiences.

All told, Celebrity Beyond will have 179 additional staterooms and suites.

After debuting in Southampton on April 27, 2022, Celebrity Beyond will sail nine- and 10-night Mediterranean cruises from Barcelona before redeploying to Port Everglades for weeklong Caribbean cruises in late October 2022.

Crew areas on board Crystal Endeavor outfitted by ALMACO
Oct 13, 2021