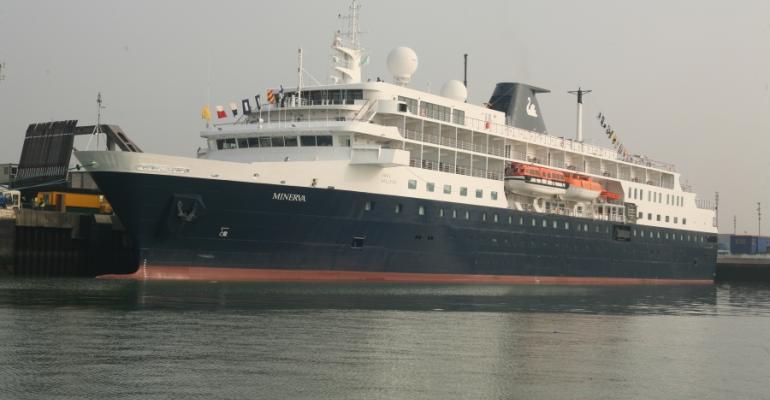 Swan Hellenic took the opportunity to showcase its newly refitted Minerva to around 200 former and potential passengers, as well as media, during a turnaround this week in Portsmouth.

Onboard, Colin Stone, managing director of Swan Hellenic and Geoff Lawrence, sales and marketing director for All Discovery Cruising, responsible for both Swan Hellenic and Voyages of Discovery brands, conducted a tour of the vessel and explained the various features of the upgradal undertaken at Lloyd Werft over a three month period this winter.

‘The major upgrade has given us far more options than we ever had before and there is now an over-riding feeling of space,’ informed Stone. ‘the ship has a new sun deck with partial canopy offering al fresco dining, 32 new balcony cabins (up from 12), a new forward facing observation lounge and bar on the top deck, a new outdoor walk round promenade deck and new en-suite facilities in every cabin.’

Instrumental in designing each element of the new look have been the passengers ‘who are very vocal at times,’ Stone added wryly, and Capt John Moulds who has sailed with the company for 15 years.

Delivered back to Swan Hellenic in March, the 350 passenger ship originally built for the company in 1997, has sailed six cruises to the Canaries, Med and Black Sea since being refurbished and will cruise six times out of UK home port of Portsmouth before going into a summer fly cruise programme in the Mediterranean. Winter 2012/13 will be spent in the Middle East and Asia.

‘Reaction so far from past passengers has been very satisfactory,’ commented Stone. He calls Minerva’s upgrade the mark of ‘a new chapter in the long history of the brand’ and ‘underlines All Leisure Group’s commitment to the future of this popular ship, enabling it to remain at the forefront of cultural discovery cruising for years to come.’  The brand has a very loyal audience boasting a 70% repeat factor and an average age of around 67.

In fact, Swan Hellenic has renewed the charter on the vessel until 2021, Stone told Seatrade Insider.

Already bookings are coming in for Minerva’s circumnavigation of South America planned for January-March 2104 said Lawrence. The 84-day, round trip Barbados voyage is currently being sold in its entirety and East and West coast sections, of 48 days and 37 days, respectively, go on sale from June 1, 2012. Ahead of that we are planning an interesting itinerary in the Caribbean in December 2013 with three stops in Cuba, described Lawrence. ‘It will be the Caribbean done the Swan’s way, with a mix of big ports and small gems with discovery the ethos at heart,' he added.

Each voyage is designed individually by a cruise planner who stays onboard for the duration whilst guests speakers and 95% of shore excursions are  included in the price.

‘Today’s event, including a lunch onboard, is the first of five planned during each 2102 turnaround day in Portsmouth so by the end  1,000 passengers will have had the chance to see and feel the rejuvenated Minerva for themselves and hopefully we will entice them back on,' said Stone.