A sneak look inside Mein Schiff 2 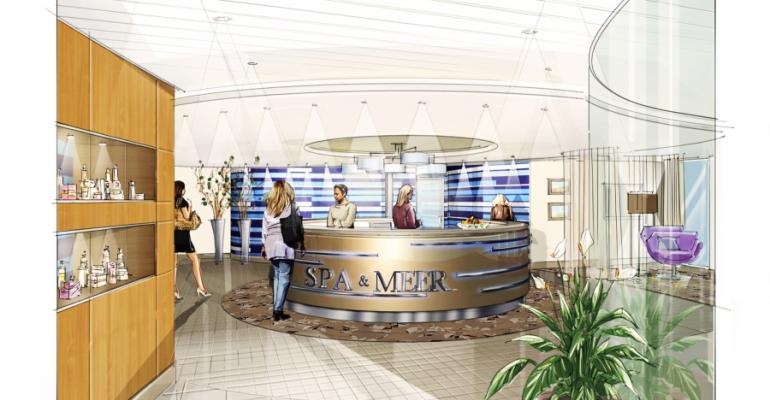 Ahead of Mein Schiff 2's naming ceremony in Hamburg on May 14, TUI Cruises revealed the onboard highlights of its latest ship which embarks on May 15 for a 9-day maiden voyage, visiting France, Britain, Sweden and Norway.

The newly designed Spa & Sports area(see rendering of reception pictured), featuring a thalassotherapy centre is located at the front of the ship on decks 11 and 12. The 45sq mtr Finnish sauna offers views of the sea, similar to the space on Mein Schiff 1 which TUI claims is the largest sauna at sea. In addition to cardio and fitness activities, sports fans can enjoy the outdoor basketball court, yoga area, and jogging track.

The Kids Club, known as 'Island of the Pirates' offers a supervised programme and an outdoor area with mini-pool. The teen space has latest generation of Xbox game consoles equipped so that multiple players can simultaneously participate in motion-controlled sports simulations.

Another new area is the sea life centre on deck 6 for discovering facts about the ocean plus opportunity to borrow books and iPads. A marine painter will be in hand to offer lessons.

The interior of Mein Schiff 2 is based around a theme of a 1,000 colours of blue.

Eight restaurants and bistros, as well as ten bars and lounges, make up the f&b offering, where almost all food and drink is included in the ticket price. venues include the main Atlantic restaurant, a buffet and a fish restaurant and Mediterranean Bistro and grill. The Steak House Surf & Turf, Blue World Sushi Bar (Deck 7) and the gourmet restaurant Richards - Fine Food have a cover charge.

The X-Lounge, on Deck 12, with its large panoramic windows offers to all guests of the junior suites and suites special services such as culinary delicacies, champagne, newspapers and free Internet service.

A series of signature shows will be aired in the theatre, located on decks 6 and 7, throughout the maiden season. Ten feature-length concerts, revues, shows and plays have been commissioned including a world premiere featuring actress Hannelore Elsner as a narrator in the rock opera SnoWhite.

Each of the 652 outside and 427 balconied cabins will be equipped with a flat screen TV, minibar and expresso machine. The 14 family cabins, 39 junior suites and 12 suites also have an Xbox game console.

There are two exclusive themed suites on deck 10 with interiors by Furncon. One is designed by famous northern German television presenter and cabaret artist Ina Müller, based on a marine theme. A highlight is a piece of furniture from Müller's apartment and some sand from a beach on Sylt, where she spent many years living on the island.

The second themed suite contains elegant and modern furnishings in the Bauhaus style. Straight lines and dark, shiny colours run through both rooms, while the bedroom is decorated in purple. An eye-catcher is the glittering wallpaper.