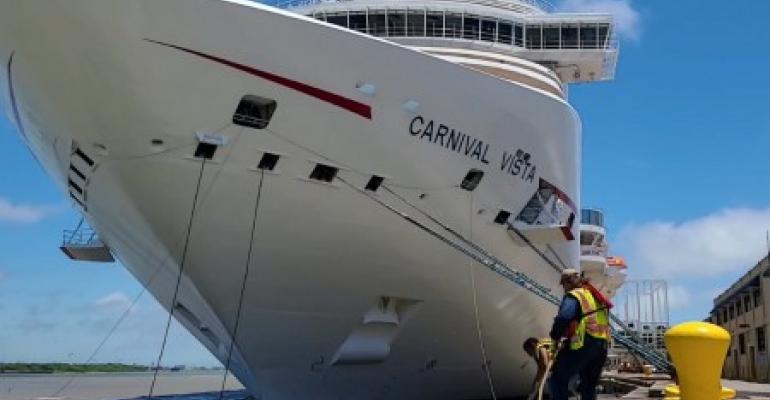 Carnival Vista sails Saturdays from Galveston
Last week and this, Carnival Cruise Line had said it was handling a 'small number' of COVID-19 cases on the Galveston-based Carnival Vista.

In statements, the line said those who tested positive were placed in isolation and close contacts were quarantined. But Carnival would not specify the numbers of infected on board.

26 crew and one passenger, all vaccinated

When the ship called at Belize this week, its maritime declaration reported 27 cases: 26 crew and one passenger among 1,441 crew and 2,895 passengers.

This according to a release from the Belize Tourism Board, which said its tourism minister and other officials met with Carnival. The line gave reassurance of its protocols to contain the virus and told the officials the infected people were isolated and contact tracing had ended with no additional cases found.

The release said 99.98% of Carnival Vista crew are vaccinated, along with 96.5% of the passengers on this week's cruise.

It also stated that everyone who tested positive is vaccinated; most are asymptomatic or have very mild symptoms.

Contact tracing involved more than 400 tests on Saturday, more than 300 on Tuesday and more than 200 on Wednesday, with no additional positive results.

Additional shipboard protocols included increased mask wearing indoors from Aug. 7 and use of N95 masks by crew. Crew social areas have been closed. Carnival, as earlier reported here, is also going to require a negative COVID test — regardless of vaccination status — taken within three days of embarkation, with all departures from Aug. 14.

Belize Ministry of Health officials inspected Carnival Vista Wednesday and the ship was cleared to call after officials determined the risk was low.

However, a negative COVID-19 test was required to go ashore, and passengers without that were subject to random testing by the Ministry of Health.

The US Centers for Disease Control and Prevention has investigated and the ship remains under observation.