'Some' Omicron impact at Carnival, 10,000 crew have received boosters 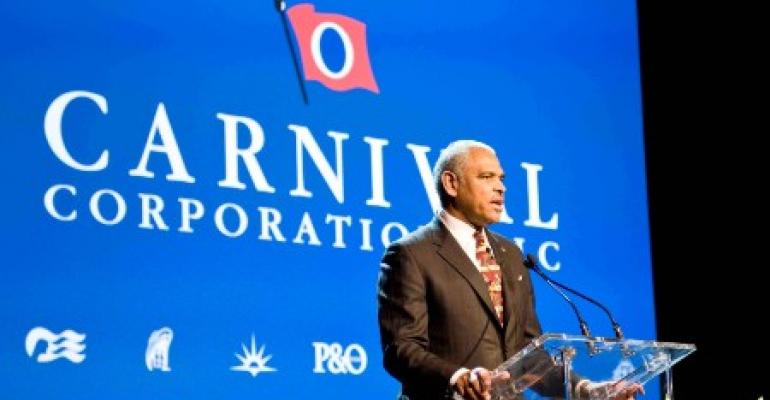 'We have not seen any major impact on the second half of 2022 or 2023 bookings. It is hard for us to quantify any impact,' President and CEO Arnold Donald said about Omicron during Monday's fourth quarter earnings call.

'We do see a little spike in near-term cruise cancellations but the booking patterns are strong.'

As for whether to require the booster, Donald said the company encourages everyone to get it and will follow the science. Testing remains mandated everywhere.

Crew are getting boosters

Carnival has returned 65,000 crew to its ships and more than 10,000 have received boosters, an effort that continues. Crew are also tested frequently.

When there are cases on board, the spread is 'very effectively controlled today,' according to the Carnival chief. 'We will adjust and adapt to what we need to do. Where we've had cases, most were asymptomatic or with minor symptoms. We've not had lots of cases where people had to be hospitalized or worse.'

Though Omicron is highly contagious, Donald said the great news is that it appears to have 'less damaging effects,' and the protocols continue to work.

As far as the impact of variants on bookings, Delta caused a slowdown in August but bookings improved sequentially and the pace had recovered by November.

'We maintained price, despite the disruption, achieving 4% higher revenue per passenger cruise day' in the recent quarter than in Q4 2019, Donald said.

Carnival Cruise Line, specifically, chalked up its second consecutive quarter of double-digit revenue growth while improving occupancy, with nearly 60% of its capacity returned to service.

The Carnival brand is now approaching 90% occupancy in December, 'and that's after the impact of variants on near-term bookings,' Donald noted.

Some Fun Ships at 100% occupancy

A number of Carnival Cruise Line ships on itineraries that are most comparable to pre-pandemic have achieved 100% occupancy,

It's hard to say which brand will be the next to substantially raise occupancy because that depends on multiple factors including itineraries and protocols. A number of European countries still have social distancing requirements so occupancy in some places there is currently capped in the 60% to 80% range.

'As we have demonstrated through the Delta variant, and now with Omicron, we have navigated near-term operational challenges,' Donald said. 'While the variants and their corresponding effect on consumer confidence have created some near-term booking volatility, our booked position has remained strong.

'In the case of the Delta variant, we've already recovered. Importantly, these variants have not had an impact on our ultimate plan to return our full fleet to guest operations in the spring of 2022.'