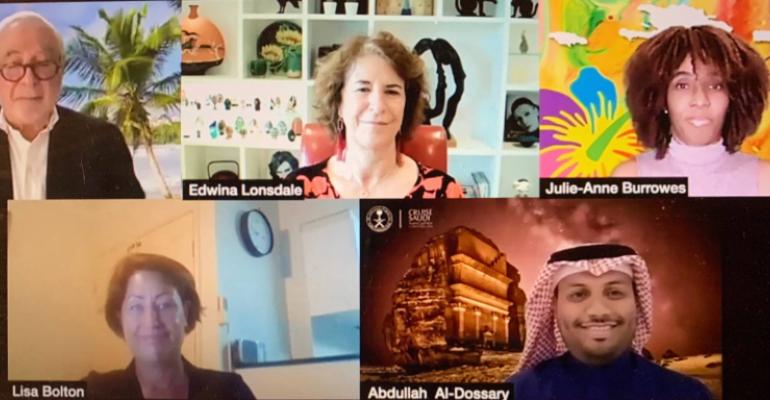 It's been called the greatest challenge facing expedition cruising: expanding, profitably, beyond the poles.

During a Seatrade Cruise Virtual session on 'Pushing the Boundaries of Expedition Cruising,' destination experts put forward an array of possibilities.

They range from Lake Superior's undiscovered North Shore Inside Passage to Saudi Arabia's otherworldly UNESCO World Heritage Sites, and from the British Isles' wilderness coastlines to the Caribbean's experiential natural and cultural draws.

Scenic Cruises and Tours is looking at Egypt, Lebanon, Cyprus, Israel and Saudi Arabia, according to Lisa Bolton, general manager of product development.

'For us it's about the history, the archaeology and really breaking down some of those cultural barriers and allowing people to have intimate connections as humans,' she said.

Assessing destinations involves how to balance history, culture, wildlife and nature and the potential for delivering experiences using tools like the six-person submarine Scenic Neptune on Scenic Eclipse.

Bookended by Thunder Bay and Sault Ste. Marie, this Great Lakes' Inside Passage is rich with nature-based experiences like hiking and kayaking, First Nations culture, petroglyphs and wreck diving.

Across the globe, Saudi Arabia plans to develop one port on the Arabian Gulf and five in the Red Sea, providing access to three UNESCO World Heritage Sites, according to Abdullah Al-Dossary, executive director of business development, Cruise Saudi.

Near Damman on the Gulf is the world's largest oasis with millions of date palms, Al-Ahasa. Accessible from the Red Sea ports are multicultural Historic Jeddah, the gateway for pilgrims to Mecca, and Al-Hijr, the largest conserved site of the Nabataean civilization south of Jordan's Petra.

Extolling the 1,600-kilometer Red Sea coast, home to one of the world's largest coral reefs with 175 species of corlas and 190 species of marine life, Al-Dossary quipped to Scenic's Bolton: 'I'd like to rent your submarine for a day.'

Wilderness coastlines of the British Isles

Edwina Lonsdale, managing director, Mundy Cruising and Mundy Adventures, praised the wilderness coastlines of western Ireland and Scotland, along with the rest of the British Isles and Northern Europe.

'We've got it all — wildlife, extraordinary scenery, history, ancient cultures, the travels of the Vikings and the Celtic religions,' Lonsdale said, an abundance that surprises expedition leaders.

According to Lonsdale, expedition cruising 'meets the zeitgeist' because it addresses what will drive consumers post-pandemic — being away from crowds, ecotourism, 'last chance' tourism, a commitment to preserving the planet, cultures and folklore; and changed priorities, moving away from materialism and consumption in favor of experiences.

'We're looking to educate people as they travel,' she said, 'turning our clients into citizen scientists and really learning how they can help' in projects such as beach cleanups and re-wilding areas of Scotland.

'We don't offer polar bears or fantastic icebergs but the Caribbean has a storied past with diverse cultural history imprinted by French, Dutch, English and Spanish colonial trade networks overlaid by slavery and our indigenous people,' said Julie-Anne Burrowes, cruise advisor, Caribbean Village.

Yes, the Caribbean is cruising's top mainstream destination, but Burrowes argued there are ample expedition assets. 'The heart of expedition cruising is providing educational and experiential activities focused on geography, culture, history and anthropology,' she said. 'The Caribbean presents a wonderful opportunity, especially considering the richness and diversity of itineraries.'

The challenge is changing perceptions of the region as just a sun and sand destination. Burrowes pointed to examples like Dominica's vast rain forest and sperm whales, Jamaica's Blue Mountains with their biodiversity and maroon history, the sunken city of Port Royal and St. Kitts' enormous Brimstone Hill Fortress, a UNESCO World Heritage Site.