'Ports get ready' is the message from expedition experts 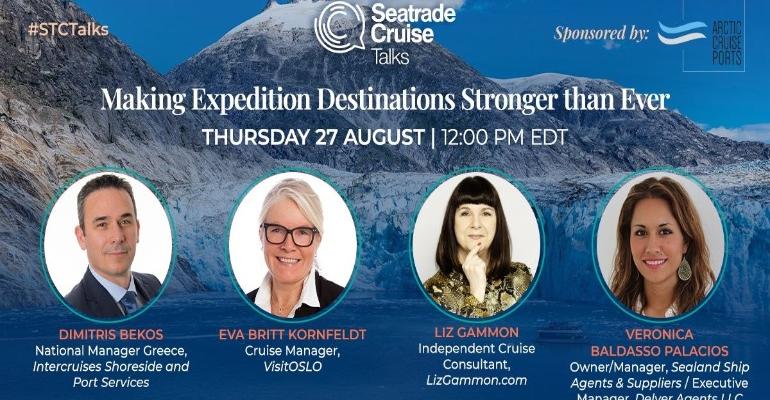 Local communities were identified as a key strength for cruise expeditions

Independent cruise consultant Liz Gammon said the message to ports is ‘be ready on the sidelines,’ with Dimitris Bekos, national manager - Greece, Intercruises Shoreside & Port Services also urging ports to have ‘protocols in place’ for when expedition cruising resumes.

Gammon questioned whether ‘more ports are needed outside of the Polar regions,’ as some could argue that expedition cruising is an ‘unhealthy burden' in a 'crowded arena,' and adding climate change means the expedition market has an ‘enormous responsibility to avoid overcrowding expedition journeys...so we don’t blow it.’

She went on to raise the topic of exploiting underwater diving as a supplement to shore-based excursions, with Bekos responding that tour operators should ‘continuously reinvent themselves and develop new products.’

‘You can’t just stick with one specific tour,' he added.

She said that in Longyearbyen, Svalbard, community guidelines have been compiled to protect local fauna and flora that attracts visitors, and commended cruise lines for their support, saying, ‘We told guests how to behave while in Longyearbyen… the cruise line helped to distribute the guidelines.’

Kornfeldt went on to add that a project was set up last year to monitor traffic more effectively in Longyearbyen ‘because there was a tendency for many operators to want to turn on the same day’, which should be avoided to ‘provide a better experience for guests.’

Bekos added, ‘I think it’s vital that local communities are involved in these expeditions… for the local culture’ and described it as a win-win.’

Veronica Baldasso Palacios, executive manager, Delver Agents LLC, said expedition vessels have ‘an advantage over big ships right now’ owing to their smaller passenger numbers and ability to ‘control where passengers have been.’