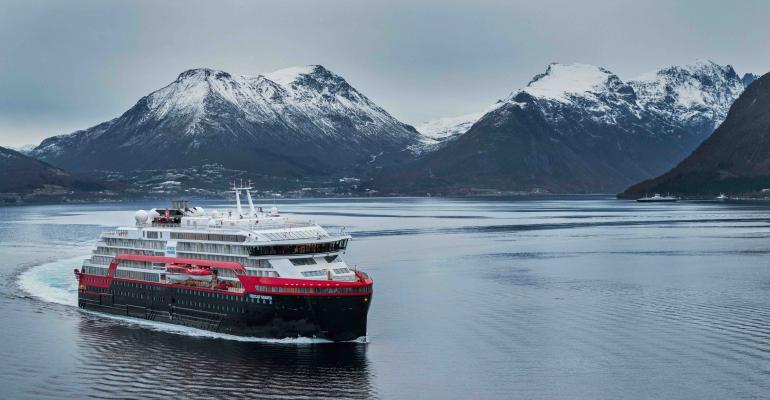 This is well ahead of the planned April 1 inaugural voyage from Hamburg to the Norwegian coast. The news follows sea trials, which included battery pack testing, in the Norwegian Fjords over the past week.

Thanks to the earlier delivery from Kleven Verft, Hurtigruten is adding a series of short pre-inaugural voyages.

Fridtjof Nansen’s new pre-inaugural dates including short saiings from London (March 7), Liverpool (March 12) and Portsmouth (March 17). These five-night jaunts around the British Isles will visit destinations such as Isles of Scilly, Fowey, Isle of Man and Dartmouth.

A four-night cruise to Oslo will travel through the Kiel Canal to Aalborg in Denmark, from London’s Tower Bridge.

The 500-passenger Fridtjof Nansen is currently in the final stages of outfitting at Kleven.

‘We are extremely satisfied with the results of the sea trials. In fact, she performed so well that we concluded the tests a full day early,’ Kleven CEO Kjetil Bollestad said. ‘Building on the experience we got from MS Roald Amundsen, we are confident in delivering one of the most advanced vessels in the world by end of the year. In cooperation with the Hurtigruten team, our employees, subcontractors and partners on Fosen Yards have all done a great job.’

Fridtjof Nansen’s maiden season includes a series of cruises from Hamburg to the Norwegian coast before summer exploring Greenland and Iceland. For the 2020/21 austral summer season the ship will join sister Roald Amundsen in Antarctica.

‘We see great demand for our expedition cruises across all markets and all destinations. With their green technology and unprecedented focus on sustainable solutions, MS Fridtjof Nansen and MS Roald Amundsen are not only driving demand, they are driving change in the cruise industry,’ Hurtigruten CEO Daniel Skjeldam said.

How IAATO operates within the Antarctic Treaty System
Oct 11, 2021