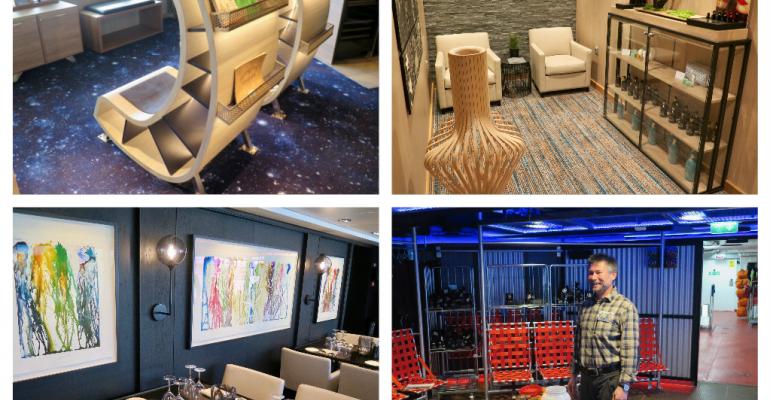 In Hurtigruten’s most extensive stateside event ever, the Norwegian company just gave nearly 300 US and Canadian travel advisors and media a taste of its new hybrid-electric ship, Roald Amundsen.

‘The US market is very important to us, both as a destination and as a source market,’ Hurtigruten CEO Daniel Skjeldam said. The company ‘hasn’t been that present in the US market, but that’s going to change,’ he added.

Just 10% of business came from the US last year. That is targeted to rise to 25% to 30%, and Hurtigruten’s Seattle office has bulked up from a few people to almost 45 to support the growth.

Low consumer and trade awareness of the brand are challenges cited by John Downey, Hurtigruten’s president for the Americas, who joined from Amazon Go in the spring. Also, ‘We need to make things much easier on our trade partners,’ he said. To that end, Hurtigruten is building a new trade portal from the ground up, with travel advisors’ input. For Canada, bilingual marketing materials are being created.

Also, pricing is now all-inclusive for the American market. Bundled in are beer and wine, Wi-Fi, one landing or excursion per day, gratuities, taxes and a weather-resistant parka.

Hurtigruten’s name may be unfamiliar in the US and Canada. But with expedition cruising booming, the company’s strength lies in experience — 126 years of it.

Hurtigruten has operated year-round in polar waters since 1893. When Otto Sverdrup, captain of the polar exploration ship Fram, returned from a three-year expedition seeking the North Pole with Fridtjof Nansen, he went to work for Hurtigruten.

In contrast, ‘A lot of players are coming into this with not much experience,’ Skjeldam said. ‘I would never go to Antarctica with a new operator,’ he added, pointing out how Hurtigruten takes the extra step of equipping all shore landings with tents, additional clothing, and food and water for 48 hours, ‘even with the ship 200 yards away. Ice could block it or the weather could change suddenly,’ he explained.

Hurtigruten underscored its long history by inviting the US and Canadian travel partners to an evening at Seattle’s Nordic Heritage Museum where they got insights into polar heroes Roald Amundsen and Fridtjof Nansen, the namesakes for the company’s new hybrid electric ships.

Skjeldam also stressed Hurtigruten’s investments in green technology and its responsible destination stewardship. By engaging communities, treating people with respect and hiring locals, ‘We arrive as guests and leave as friends,’ he said.

In recent years, under Skeldam’s leadership, Hurtigruten has branched out from the venerable Norwegian coastal voyage to focus on expedition cruising. It currently visits 200 destinations in more than 30 countries, and will go to many more in future, he said.

The Hurtigruten guests continued by motor coach to Vancouver, BC, for Roald Amundsen’s maiden call there at the conclusion of its Northwest Passage transit.

The ship is remaining in Vancouver to undergo unplanned maintenance — believed to be the replacement of a gasket on one of the pods — before deadheading down the Pacific Coast to Valparaíso, Chile. From there it’s going to embark on a maiden voyage to Patagonia, the Chilean fjords and Antarctica in late October. On Nov. 8, the ship will become the first ever named in Antarctica.

Roald Amundsen is set to return to Vancouver next year for a full Alaska season, and ‘We hope in the future we’ll have a lot more than one ship sailing to Alaska,’ Skjeldam said.

At 140 meters/460 feet and 21,000gt, Roald Amundsen can fit into smaller ports. Carrying 530 passengers, it has considerably greater capacity than most expedition ships at a time when polar landing sites are limited to 100 people.

‘We think that’s the perfect size because it’s a more comfortable ship,’ Skeldam said. ‘There is no shortage of activities’ and this will ‘widen the audience for expedition cruising.’

Explaining how landings will be managed in Antarctica, he said 100 people will go ashore, while kayak groups of about 25 people are dispatched directly from the ship’s two-pontoon platform. Another 100 to 150 go ‘ice cruising’ on boats that carry up to 18 people each.

Skjeldam said 45 to 50 minutes on land is enough for most people, while the ice cruises, where animals like leopard seals and whales can be observed, last longer. The other half of the passengers get to explore during the day’s second landing.

Roald Amundsen carries 18 expedition staff, which seems relatively low for the passenger count except they only guide and lecture, not drive the boats. That is left to the crew.

In the ship's Expedition Launch area, people suit up to explore. Boots, lifejackets, snowshoes, shovels, ski poles and other gear are stored there, along with the emergency supplies that go ashore for all landings. A large LED screen shows passengers the landing site before they head out.

One thing Hurtigruten doesn’t espouse: helicopters. ‘They make a lot of noise. That completely destroys the experience for everyone who’s not in the helicopter,’ Skjeldam said. Underwater drones are OK, though. They’re very quiet, and the footage they capture is broadcast on board.

Mounted on Roald Amundsen’s mast is a Panomax 360-degree camera that can zoom in on points of interest. High-definition images are projected on screens throughout the ship and in cabins.

For perhaps the ultimate polar thrill (or chill?), passengers can enter a lottery for the chance to sleep ashore in Antarctica in 16 two-person tents.

Roald Amundsen was designed with a ‘modern Nordic look and feel,’ with natural materials including granite, oak, birch and wool. The ship big windows for light and great views, while (faux) fireplaces add warmth. Besides comforters, beds have wool blankets that resemble those used on the legendary polar ship Fram.

At the center of the ship, a seven-deck-high LED screen continuously projects nature images. These are visible — to spectacular effect — along the corridors, through the glass elevators and landings.

There are three restaurants — the main dining room Aune; the a la carte Fredheim, which serves ‘amazing milkshakes’ and ‘dumplings to die for’; and the Lindstrøm restaurant, for fine dining, which has paintings by Norway’s Queen Sonja.

A spa and wellness center provide space for yoga, cardio and strength training, and massages. The sauna has floor-to-ceiling windows. The outdoor pool is heated.

Travel advisors who overnighted aboard Roald Amundsen in Vancouver were impressed.

‘They’ve done an excellent job,’ said Eric Maryanov, president of Los Angeles-based All-Travel and chairnan of Signature Travel Network. ‘It truly feels like exploration with luxury but they put the exploration first. The ship is stunning.’

Everything was designed to ‘look outward,’ he said, and there’s easy access to the open decks. The Science Center is 'very impressive.'

Exploration travel is going to explode, in his view. Improved on-board communications now make it possible for people who are still working to take these kinds of longer, far-flung trips.

Maryanov likes what he’s seen of plans for Hurtigruten's agent portal. ‘It’s a huge step forward and will make bookings easier,' he said. 'They’re definitely making changes that are sensitive to us as travel advisors and for the US market.'

Joyce Landry, CEO of Miami-based Landry & Kling, considers Roald Amundsen ‘the most beautiful expedition ship I’ve ever seen. The facilities, the quality of the materials and the craftsmanship elevate it from all the others. The food I’ve had was very much luxury standard,’ she said.

Skjeldam said US passengers give high marks to Hurtigruten, and he heard overwhelmingly positive feedback from the US and Canadian agents who visited.

Option for a third ship not firm

‘We want to build a third, fourth and fifth ship,’ Skjeldam told Seatrade Cruise News. However, Hurtigruten doesn’t plan to move forward with the third until Kleven Werft’s situation is resolved.

Hurtigruten had to take ownership of the yard to build Roald Amundsen and 2020 sister ship Fridtjof Nansen, and some of the upgrades to its existing fleet will be done there.

But the cruise operator doesn’t want to be in the shipbuilding business.

‘We’re in discussions with different groups,’ Skjeldam said. Either another investor will be found, or the company will look to build elsewhere.